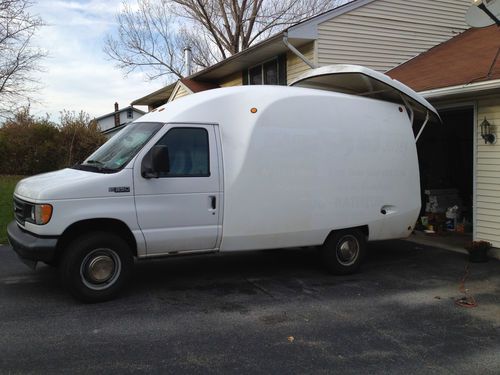 2003 Ford E-350 cutaway van with Unicel fiberglass body. 5.4L V8. 128,000 miles. It passed NJ state inspection very recently. New battery. Approximately 75% tread on the tires. Runs and drives great. A/C and heat all work. Shelving inside and work bench. There is room to stand and work inside.  The top section of the body is translucent to allow light in.

The van was used previously by a bathroom remodel/plumbing business.

Cosmetically the van is in good shape.  Some slight rust where the paint chipped at the bottom of the driver side door.  The fiberglass body has a couple small (1-2 inch) cracks but nothing affecting structure or weather proofing.  Interior is also good.  Quite a few stains from calk on seats and floor.  Seats are in good shape overall.

This van is in overall very good shape and can be put to work immediately.

The title problem that Autocheck here on Ebay is listing is because of a DMV screw up.  Someone added an "M" to the title which means that the odometer exceeded it's mechanical limits.  That would mean that 1,000,000 miles (because it's a 6 digit odometer) had been put on the truck between 2/11/2008 and 11/21/2008.  Not only is that impossible, but the I'm pretty sure this truck isn't going to see 1,000,000 miles.  Please look at the entire Autocheck report to confirm.  DMV will fix the problem, but they want $60 and month of time to do it, which we will do if need be.

Feel free to ask any questions.