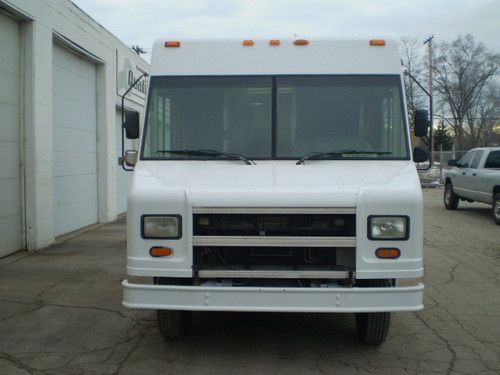 THE ITEM UP FOR AUCTION IS A 2002 FORD E-350 SUPER DUTY CUTAWAY STEP VAN. THIS TRCK HAS A REAR ROLL UP DOOR, ONE ROLL UP ON THE DRIVER SIDE, AND TWO ROLL UP DOORS ON THE PASSENGER SIDE. THIS HAS BEEN MAINTAINED REGULARLY AND HAS A FRESH PAINT JOB. THIS HAS THE 5.4 LITER WITH 131000 MILES ON IT. HERE ARE A LIST OF ITEMS REPLACED IN THE LAST TWO YEARS

THIS TRUCK RUNS GREAT AND ALSO HAS SHELVING UNITS THAT WILL COME WITH IT (AS SHOWN IN THE PICTURES) THIS IS BEING SOLD AS IS AND CAN BE PICKED UP IN MISHAWAKA IN. THANK YOU FOR LOOKING. PAYMENT IS DUE NO LATER THAN 5 DAYS AFTER AUCTIONS END.

THIS IS ALSO FOR SALE LOCALLY AND I RESERVE THE RIGHT TO END THIS LISTING AT ANYTIME.