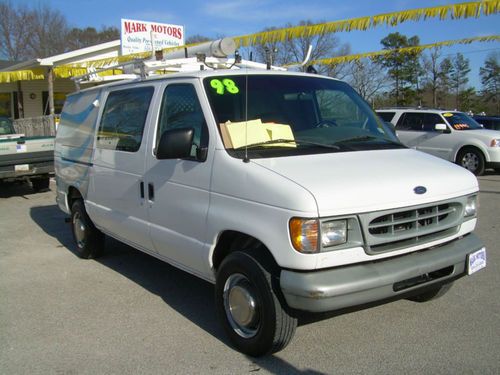 You are looking at a 1998 Ford Econoline that is a former AT&T van. This is a one-owner off-lease fleet maintained ready to work. This unit has been serviced and the tire tread is around 60-70%. This unit has the V6, auto and air. As seen in pics this unit does have shelving and a ladder rack. As seen in pics, this van does have a few light scratches on both rear sides but nothing abnormal for this year of van. If you are looking for a low mileage work van then this van is for you.

These are used units. We do not guarantee dents, scratches, rust, or any other imperfections upon arrival. We list these units to the best of our abilities. If you have any questions, make sure to call us before bidding because all sales are final upon your arrival.

We accept the following payment methods: cash in person or bank money wire. We do not accept checks of any kind so please do not ask. We require a $250.00 nonrefundable deposit within 48 hours of auction end. The remaining balance is due in full within 7 days of auction end.

We reserve the right to end this auction early due to unit selling locally.

All units are sold as is.