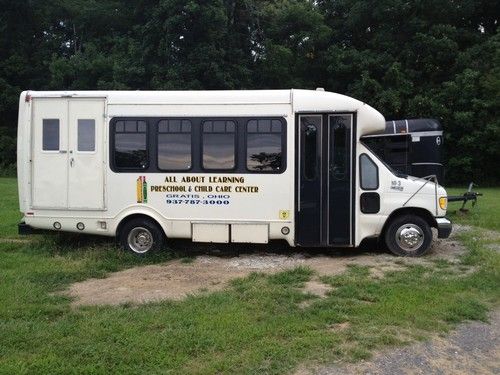 Condition: UsedA vehicle is considered used if it has been registered and issued a title. Used vehicles have had at least one previous owner. The condition of the exterior, interior and engine can vary depending on the vehicle's history. See the seller's listing for full details and description of any imperfections.Seller Notes:"16 Passenger Bus. Has capability of a wheelchair lift however, we took that out to use the back for storage so it does not currently have a lift in it. Very clean. All seats have seat belts, installed a brand new alternator in June of 2013. Tires were purchased 3 years ago when we bought it. We drove it approximately 500 miles on these tires. Overall a very nice little bus. Here are some features:7.3 Diesel Engine217,000 miles16 Passenger Capacity with seat belts in all seats.Windows all in good working order Very CleanThis bus was purchased and used with our Daycare Center. Vehicle passed all safety inspections by State Highway Patrol. We are selling this bus because we no longer need it for transporting children."

Selling our Daycare Bus. This is a GREAT bus. It has a lot of features that will make this a great asset to anyone whether you are looking for a Daycare/Church/Party Bus.

It has the following features:
* 16 Capacity Vinyl Seating: all with seat belts
* Carpet  Flooring
* Very Clean Interior
* Windows all in working order that allows passenger to put window up or down.
* Driver has a door lever to open and close main entrance door
* Has 2 Emergency exits in back. One of the exits on the right side has the capability to have a wheel chair lift. We purchased this bus with the lift included; however, we took the lift out and is no longer on the bus or
in our possession.
* A/C and Heat both work great.
* Has  217,017 miles on it
* Alternator was replaced in June of this year 2013.
* Runs good
*** Passed all Ohio State Highway Patrol Inspections regarding bus safety in transporting of children in 2011. Bus is no longer being used for Daycare because it does not meet new Ohio Department of Job and Family Services Guidelines on Bus Qualifications for Licensed Daycare Centers.