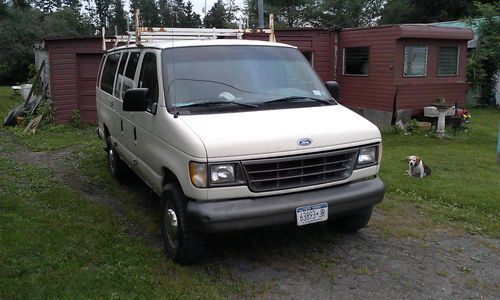 Condition: UsedA vehicle is considered used if it has been registered and issued a title. Used vehicles have had at least one previous owner. The condition of the exterior, interior and engine can vary depending on the vehicle's history. See the seller's listing for full details and description of any imperfections.Seller Notes:"Runs good, had it on the road for the past 3 years. Still on the road is a daily driver. There is minor rust around wheel arches. The paint is good but a little tlc in this dept. would not hurt. Tires are worn really need to be changed.I use the van for furniture removal and just light duty work.This was a passenger vehicle, now the seats are gone so is the trim in the rear. Driver and passenger seat and trim are intact.Last week the IDM was replaced.Brakes work great.Transmission works fine no issues.Towing feature works well.All lights and turn signals, hazard lights workTowing lights work when hooked up.Head lining is coming unstuck near wind shield top.Rubber floor cover is good no tears.Seats no tears."

The van has been my daily driver for the past 3 years, the worst thing that happened the IDM failed so that was replaced last year and then recently it failed again. My diesel guy said he would replace it free of charge because it was still under warranty and because the bad IDM was reported as troublesome he switched to another manufacturer so I guess this to would be covered!

This van was purchased from a very nice man in the next town over in Rome NY. He assured me I could pull a house with it if I wanted to. And it would drive like a champ, well he was right it does perform very well and I have towed a few trailers. The brake and light and hazard features all work satisfactorily. The cargo area will accomodate sheets of 12ft. sheets of rock or ply.

The reason I'm selling I have a pickup now and would like to run a sedan for my 2nd vehicle.

This is a pickup only auction, I insist on payment at the end of the auction using Paypal or certified check is good, not when the vehicle is picked up!