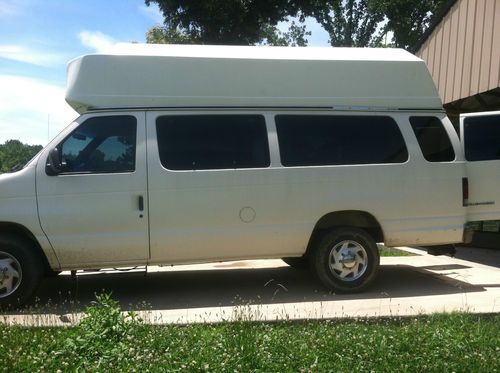 Condition: Used: A vehicle is considered used if it has been registered and issued a title. Used vehicles have had at least one previous owner. The condition of the exterior, interior and engine can vary depending on the vehicle's history. See the seller's listing for full details and description of any imperfections. ...
1996 Ford Club Wagon Hi-Top this is a great vehicle , runs great, very dependable. A/C works great , front and rear A/C. It has Limo tint on the windows in the rear, but can still see out very well. The front windows has the legal amount of tint on the windows. You can stand up inside the back with no problems, it has about 6' 5" clearance . We used this to haul furniture for our business, we needed a box truck so thats why we are selling. It will need a set of new tires, they will go several more miles, but there must be a broken belt or a small knot in one of the tires, just buy one used tire and it will be ok. Front seats are brand new and are in perfect shape. The cruise and the horn do not work, i havent had time to see what the problem is, It may be a fuse because they are both on the steering wheel. The rear doors only open from the inside, that should be an easy fix. Other than that you can drive it anywhere. The van is in great shape for its age. It does have a few minor places on the paint and could use a detail job. Please ask any questions you may have! Thanks!!