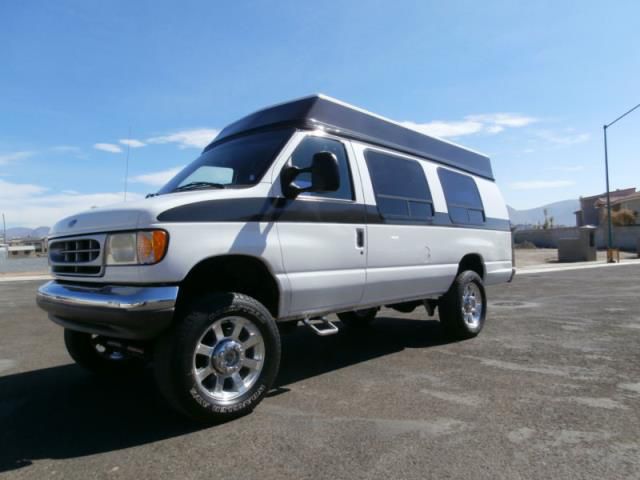 UP FOR SALE 1995 FORD E350 DIESEL VAN 12 PASSENGER WITH 136,000 MILES NOTHING FOR THE BEST ENGINE EVER MADE THE 7.3 POWERSTROKE TURBO INTERNATIONAL ENGINE VAN RUNS GREAT NO ISSUES NEEDS NOTHING HAS A RE-MANUFACTURE TRANSMISSION VAN HAS NEW SEATS ALL OF THEM INCLUDING DRIVER AND PASSENGER ALSO NEW REAR FLOOR VINYL HAS FRONT AND REAR AC BLOWS COLD NEW SHOCKS ALL WAY AROUND PROCOMP NITROGEN CHARGE FRONT NEW DOUBLE STEERING SHOCKS ALL NEW ,HAS NEW SHAFTS FRONT AND BACK FRONT AXLE IS 2010 DANA 60 WITH ONLY 35,000 MILES ON IT REAR AXLE IS A STERLING 10.5 LIMITED SLIP ALSO 2010 ..HAS NEW BREAKS ALL WAY AROUND ALSO HAS NEWER EXTENDED NEW STYLE MIRRORS,,TOO MUCH TO LIST ANY QUESTIONS LET ME KNOW IF WINNING BIDDER IS FROM OUT OF STATE I BE MORE THAN HAPPY TO PICK YOU UP AT SAN DIEGO AIRPORT ITS ONLY 10 MINUTES AWAY FROM MY PLACE...HAPPY BIDDING DONT LET IT SLIP WAY NO OTHER LIKE IT OUT THERE VAN IS GREAT AND SAFE VEHICLE TO DRIVE