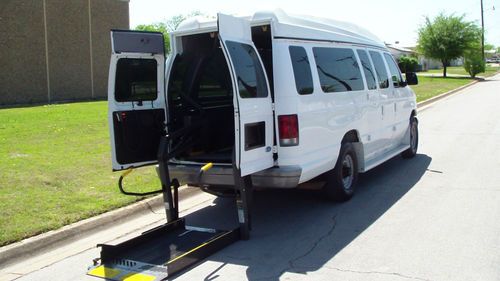 Up for sale is a 95 Ford extended van.  This van runs out and drives great with no known issues.  It has all the basic options including really cold A/C in the front an rear along with cruise control.  The tires and brakes are good as well.

The lift in the rear is a Braun heavy duty series which can lift 800lbs with a really long platform.  The back also has the raised doors for more head room when loading.  There is a 2 man bench seat that can be folded down for extra seating or folded back up to make room for another wheelchair.  There are tie down points for 2 chairs, 3 chairs look like they can fit but I'm not certain of that.

The van is in good shape both inside and out with no severe damage to report.  This van would work perfect for church or retirement facility or a non-emergency transport.

Shipping is available, just call for a quote or if you would like to fly in, I can pick you up at the Dallas/Fort Worth airport.