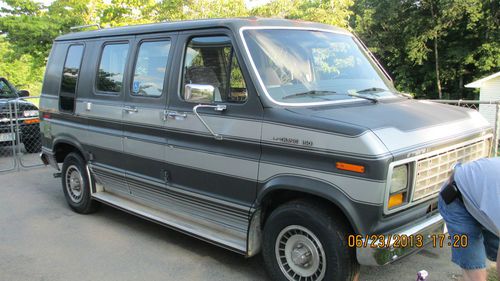 1989 Ford Econoline E-150 handicapped van with 91,500 miles. Just recently serviced and had new brake calipers, rotors, pads, hoses, bearings and seals, new radiator, thermostat, and housing, fuel filter, lube, oil, all fluid levels checked, new transmission lines, replaced all tie rods and tie bars, new tires and four wheel alignment. The van is in great condition but does still need a few things, it needs a new fuel sending unit, and the ac needs to be checked it may just need charged but I'm not sure I forgot to have it checked. The exterior of the van is clean and dent free, but does have lite surface rust on van due to setting in the sun for awhile, you can see that in the pics. The runs great with no mechanical issues. The interior is in good shape. The lift can be operated from a locked control panel on the outside of van which will open and close the doors and fully operate the lift, or you can use the remote box also, this lift was not cheap not for sure on the value but it is not a cheap one. Thanks for looking.