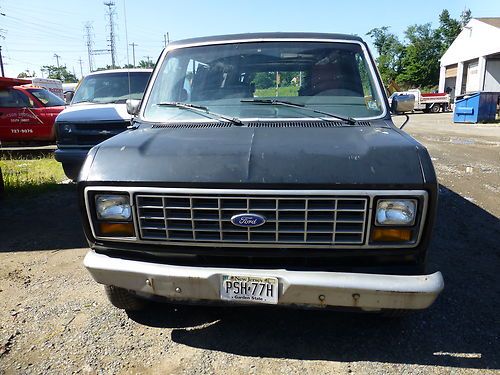 THE VAN RUNS GOOD. HAS BEEN PARKED FOR THE LAST 2 YEARS BECAUSE I HAVE NO USE FOR IT ANY MORE. I USED IT AS A ROAD SERVICE VAN FOR A LONG TIME. THE ITEMS INSIDE ARE NOT INCLUDED. WHEN I STOP USING IT, SOME OIL WAS LEAKING FROM THE REAR ENGINE SEAL. IT WILL NEED TO BE REPLACED BY WHOEVER BUYS IT. IF YOU LOOK AT THE PICTURES, YOU WILL SEE THAT THE DRIVER SEAT HAS SOME SMALL HOLES IN THE CUSHION. THE BUYER WOULD HAVE TO PICK UP THE VAN. IF YOU HAVE ANY QUESTIONS, CONTACT ALEX AT 732 939 9701