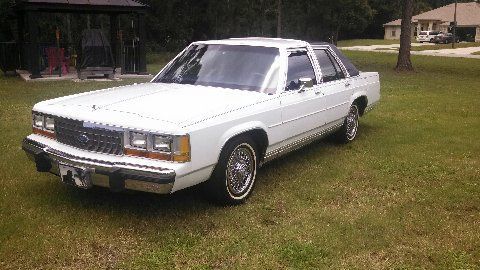 Condition: Used: A vehicle is considered used if it has been registered and issued a title. Used vehicles have had at least one previous owner. The condition of the exterior, interior and engine can vary depending on the vehicle's history. See the seller's listing for full details and description of any imperfections. ...
Here is beautiful 1988 Ford LTD Crown Victoria 37,000 original miles one owner car before me.
I really got this from a little old lady 86 years old she and her husband bought it new in 1988 This Car is Beautiful and when you drive it down the road every gives you a thumbs up, a real head turner.
loaded with all options including very rear continental wheel kit in Back
134a Freon  A/C ice cold
Power windows
Power seats
tilt wheel
intermittent wipers
cruise control
Power mirrors
Tinted windows
interior mint cloth seats
no one ever sat in the back seat
true Dual exhaust system with Flow master mufflers (sound great)
Asking price $7,200.00 OBO Appraised value of this car is $10,000.00. Garage kept since new.  You would be hard pressed to find a nicer example.  The original owner before me was an 85 year old woman.
I am listing this nice car for a friend who lives Florida, where the car is located. The buyer is responsible for shipping and costs to ship. The will help with locating a fair priced auto shipper if needed.