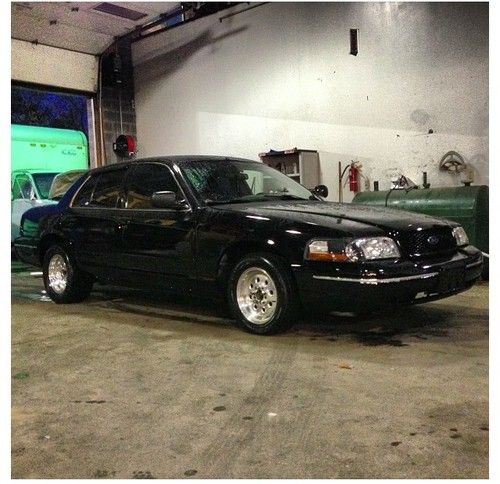 Condition: Used: A vehicle is considered used if it has been registered and issued a title. Used vehicles have had at least one previous owner. The condition of the exterior, interior and engine can vary depending on the vehicle's history. See the seller's listing for full details and description of any imperfections. ...
2002 Crown Victoria with a ls1/4l60e swap!
Reserve is set to what I paid for the motor and trans alone!!
The car started life as a P71 Police Interceptor with a 4.6 dohc motor... the motor and trans were pulled about 25k miles ago and replaced with a LS1 and a 4l60e out of a 2001 Firebird

Mechanically the car runs drives and stops like it should all the gauges work including the fuel gauge and speedometer. The swap was very well done its extremely clean and looks factory

Cosmetically it could use a little work although I am very meticulous with my vehicles so I may be exaggerating a little bit. The car was just completely repainted black, it looks very good with the exception of a run in the drivers fender (I tried to take a picture but the camera wouldnt pick it up)
and also there is a little spider cracking on the front bumper.

The interior is also very respectable but not up to my standards the seats are out of an 05 crown vic (very comfortable) theres some odds and end interior pieces that the previous owner had painted black with interior paint that are starting to chip but I guess thats no biggie im just trying to be as honest as possible. The seats have some minor staining that should clean up well and the black carpet has some wrinkles in it (again just trying to nitpick it)

The AC blew cold all last summer and was cold this past spring but its slowly starting to get warm I'm sure it just needs a recharge. The heat blows hot like it should, radio works great has a 7" in dash touch screen radio cd/mp3/dvd player

still has a working police spot light and all the wiring for the camera and lights etc so if you wanted to turn it back into a funtioning cop car it would be hard at all!

The wheels are 15x9 Weld drag lites on the rear and 15x7 in the front with bg goodrich drag radials on the rear. it also has air shocks on the rear that can be raised or lowered to your liking


All in all its a turn key driver you can show up start it right up and drive it home with no worries at all it is extremely reliable and you can expect 20-21 mpg and 16-18mpg around town very cant stress enough how nice the drivetrain is in this car!

Please message me if youd like to come see the car before you bid, I have nothing to hide id prefer people to come see it so they can appreciate it!


Cash or Paypal ONLY Ive been burned before so I am clarifying now no money orders no certified checks no bank checks no loans from the banks no IOUs no rubber checks lol Good luck and Happy Bidding!