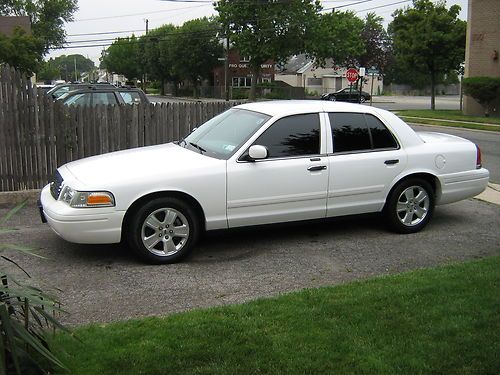 What you are looking at here is a MINT example of the end of an era for the Ford Motor Company. This is a 2011 Crown Victoria LX. 2011 was the last year for these rear drive, front V8 engine beauties. I bought this car last year as a Certified Preowned Ford with 22K miles on it and drove it sparingly and only for pleasure. I have a car issued to me for work so this car saw only pleasure usage including a trip to Ocean City, MD. As you can see from the pictures, the car is MINT and the 5% window tint really makes that bright white paint pop...The car has had two oil changes (every 3K miles) since I bought it, runs flawlessly and all four of the Michelin radials are very good. It has plenty of power and stops as it should with its four wheel anti-lock disc brakes. I also installed a one inch rear sway bar that makes this car handle even better than when I got it and very similar to an Interceptor. Also included is a Ford Trunk organizer and that in itself is somewhat of a rarity. It serves as great hidden storage and is easily removed for transporting larger items. If you have any questions, please send them. Buy it now or send your offers with confidence that this white beauty will NOT disappoint. If you have any questions, please send them.