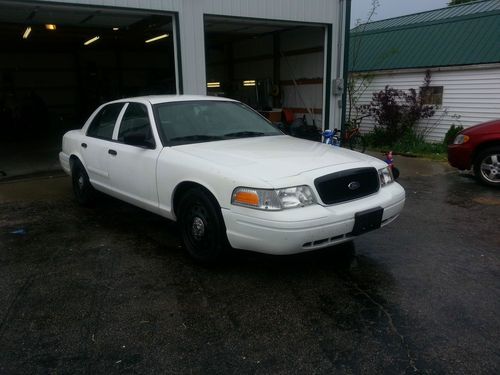 YOU ARE LOOKING AT MY 2007 FORD CROWN VICTORIA IT RUNS AND DRIVES GREAT I HAVE BEEN DRIVING IT AND IT NEEDS NOTHING. THE BRAKES ARE GOOD AND THE AIR IS ICE COLD. IT HAS NEW TIRES ON ALL FOUR WHEELS.ANY ROOF HOLES HAVE BEEN PLUGGED. AS YOU CAN SEE THEN INTERIOR IS CLEAN AND FREE FROM DEFECTS THE SEATS ARE IN GOOD CONDITION DRV SEAT IS IN GOOD SHAPE AND HAS NO HOLES IN IT. ON A SCALE OF 1 TO 10 THIS CAR INSODE IS AN 8 AND OUTSIDE A 8 IF YOU WANT TO PUT IT BACK INTO USE I HAVE A LIGHTBAR LED AND SIREN AS WELL AS CONSOLE I CAN ADD AND HAVE FUNCTIONAL FOR 500 MORE LET ME KNOW IF YOU HAVE ANY QUESTIONS PLEASE LET ME KNOW . AS WITH ALL EBAY ITEMS ITS SOLD AS IS WHERE IS AND ALL DEPOSITS ARE NON REFUNDABLE