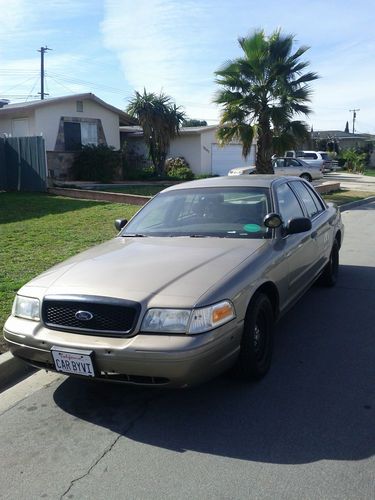 I bought this car directly from a rural (Minnesota) sheriff department just over a year ago.

It is in great shape, and I have used it daily since I bought and drove back across country to California.
It has recently gotten a complete mechanical going over, including replacing the Alternator and Battery, New serpentine belt. Replaced several of the individual coils (coil on plug system) and just completed a full tune up with new plugs, all new filters (air and oil) as well as changing the oil.
Tires are in great shape, they are police style, plenty of life left on them (see photo's). Brakes are good, replaced a few months ago.
This vehicle passed the California SMOG test with extremely clean readings. It has been well maintained its entire life, and I have taken great care of it during my tenure :)
I will mention there are no rips or tears on the upholstery, but there are a few coffee stains etc. On the outside, there is a police spotlight on the driver side that is non functioning at this time.
The body is in pretty good shape, negatives are holes in the front bumper where the push-bar used to be, some plugs where the police equipment used to be mounted on the roof, but never a leak and there is one of the small police hubcaps missing.
This is a car that is a pleasure to drive, it also garnishes a bit more respect rolling down the road than your typical automobile. People tend to just move out of your way when you are cruising down the highway.... cant imagine why :)
I must say that this is a 12 year old former police car, as such it is not in show room condition, it is however well taken care of, but there are defects, and will be sold "As is, Where is".
This is not your standard Black and White unit, this one came loaded from the factory, Cruise control, and carpets came as standard.  This is a nice cruiser! I am only selling it as I just bought a new car the other day, and do not need to be paying insurance on 2 cars.