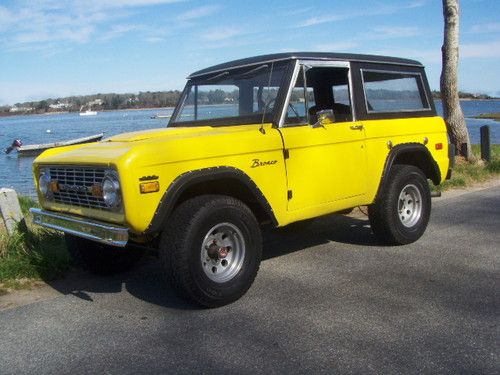 This is a Bronco that's had all the hard work done. It runs and drives very well. The engine was rebuilt just before I bought it 2 years ago and hasn't had much use. When I got it I put in a rebuilt 3 speed trans, all new brakes, a rear main seal ,all 4 shocks , wheel bearings, suspension bushings. New bumpers, steering box, exhaust system, and all gauges and wiring refreshed to assure good working order for all electronics. I'm sure that I have forgotten some things that where done.

Structurally , the frame has been thoroughly repaired. The front floors and the trans tunnel have new steel. The cowl and firewall have been newly redone with new steel.  Anything that was needed was done. This vehicle is ready to be taken to a higher personal level of preference by some one who likes Broncos . I just wanted to bring it up to a good driving level and then pass it on ... it's ready... I have a low reserve and I hope someone who really wants a Bronco gets it.   Call me at 508 428 9658... ask for Tom