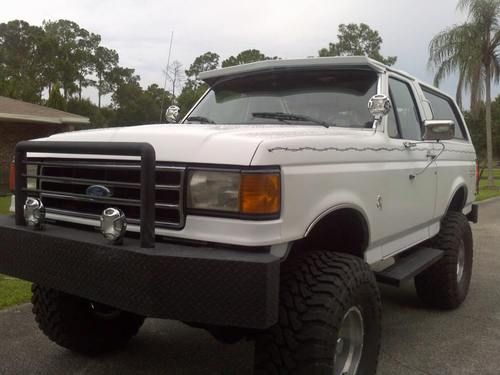 Super nice Ford Bronco. It is powered by a 5.0 302 with dual exhaust (flow master) and automatic transmission The 4x4 works as it should. The 37 inch tires (toyo open country)  are new and has a full size spare. It has an 8 inch suspension lift, Custom bumpers and side steps. The top is removable. The interior is very nice and has extremely cold air conditioning and heat. It is a big, solid, dependable truck that needs nothing. Overall this Bronco is in awesome running and looking condition. In April of this year new tires were installed as well as a new steering box and pump, brakes, alternator, starter, bright white headlights, fluid change and more,  over $3000.00.    The Bronco is mileage exempt/ odometer reads 72k and drives nice for a big truck.  I can send more info upon request. Contact # 772-323-1968 Thank you for your interest.