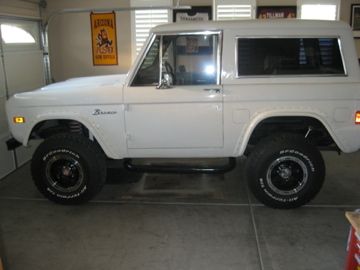 Condition: UsedA vehicle is considered used if it has been registered and issued a title. Used vehicles have had at least one previous owner. The condition of the exterior, interior and engine can vary depending on the vehicle's history. See the seller's listing for full details and description of any imperfections.Seller Notes:"FRESH RESTORE ALL ORIG."

1977 FORD FORD BRONCO RANGER 72000 ORIGINAL DOCUMENTED MILES ITS BEEN IN THE FAMILY SINCE NEW THIS ONE ALL ORIGINAL AND HAS 0 RUST ISSUES ALL PANELS ARE ORIGINAL ITS A 5.0  302 V8 MATCHING # I REBUILT THE MOTOR REPLACING ALL SEALS GASKET RINGS CAM AND HAS LESS THAN 100 MILES ON IT ITS AUTOMATIC IT HAS A FRESH PAINT JOB BRAND NEW TIRES AND WHEELS I HAVE THE ORIGINAL WHEELS THAT GOES WHIH VEHICLE JUST PUT IN A/C IN HER THE INTERIOR IS IS IMMAC. COND IT HAS A 5.5 INCH LIFT RUNNING 33 INCH BFG AT THIS BRONCO RUNS AND DRIVES LIKE NEW ITS TURN KEY AND GO ITS AN AZ VEHICLE . I CAN GO ON AND AND BUT I WILL LET THE PICS DO THE TALKING