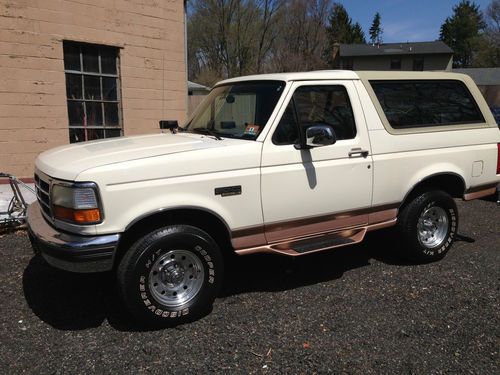 You are bidding on a nice bronco, has a new alternator and battery, tires are in good shape, truck runs great, shifts nice, ac blows cold, truck was bought new from my friend from the dealer with about 20000 miles on it and he has had it ever since. The tailgate has no rot and the window works, there was some small rot above wheel wells which they all get , i repaired it not professionally but looks pretty good, under the truck it basically has just normal surface rust for a 1995 and is not rotted out!!!! The int is leather and it good shape except the driver seat was torn so i covered with a seat cover. Truck will need lower ball joints in the future as it has a little of the bronco sway but it is not bad at all. Cash at pickup or certified bank check from a well known bank.