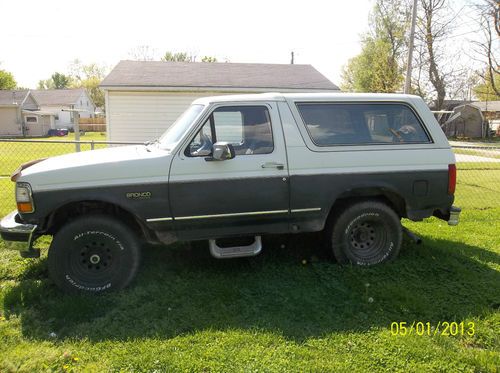 1993 white/grey ford bronco 4 wheel dr., 5.8L 351Cu. In. V8 GAS OHV Naturally Aspirated Engine (AKA 351 Windsor) runs good and is a clean motor. I'm leaving the Sony Xplod stereo CD player in it. it only has 1 speaker that needs hooked up. odometer reads 201091 but on title is shows exempt. transmission has nothing wrong with it and it shifts good.  interior is in great shape all except a hole in the drivers seat. it has some rust spots on the body. hood could use some touch up paint. tires shouldn't need changed for a little while. it has a clear title. back comes off making it a convertible. it has power seats, windows, cruise control, ABS, cold AC and new breaks on it. front driver side needs the seat-spring replaced. I already purchased seat-springs for the driver and passenger side costing me $300.00. better off replacing both at the same time. I just haven't had time to install them. check engine light does not come on. I looked this vehicle up on Kelley blue book and its suggested sale price is $2735.00. a $1000.00 deposit to paypal is required 48 hours or less. the rest can either be cash in hand or paypal payment. buyer is responsible for pick up or shipping arrangements. vehicle must be picked up within 7 days or less.