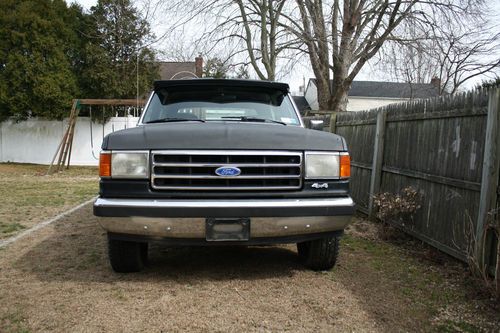 Hello up for sale is a 1990 Ford Bronco 5.8L XLT, The car is in really good condition  , carfax states lien but it does not have one I have Ford motor company lien release in hand so it has a clean title . I recently did an oil change on the motor and it runs great. The Interior in the car is 10 out of 10  no rips or cuts. The car has a removable top which is great condition and has the tow package . It is a 4x4  and the tires have 95 percent of tread on them . The rust is minor  as you can see in the pics  and the only part that was affected is the leaf springs in the rear. The cars little problems are the passenger window needs a motor and diver window  will go down but needs help going up sometimes and The passenger mirror needs replacing. The tach/Rpm gauge was disconnected by the last owner as they wanted to put an autometer gauge in. The final thing is the Truck Needs a Transmission pump and possibly a torque converter as I was told .  I had it checked out by a local mechanic and I was told its not an expensive fix . The Truck does move  back and forth no problem

A little bit of work and the car is a monster   .

I am the second owner of the car  I purchased it from the original owner .

Car is sold As is