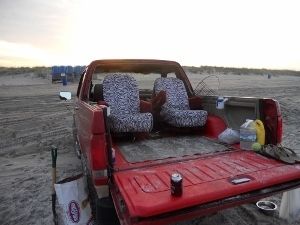 Yes indeed this Bronco came with a 5.8L. I changed 5.8L to a carbed 5.0L. It has an Edelbrock 650CFM carb, bored .60 over, has Pace setter headers, and an MSD 6AL ignition. The carpet has been removed and the floors Herculined. I removed the bench seat in the rear and replaced it with captains chairs. The rear window rolls up. The hood has a burn mark from the previous owner and the paint is starting to bubble at the bottom of the tailgate, other than that the body is solid. I am asking $3,500. My name is Stefan give me a call at eight one 0 24 zero 80 two one.