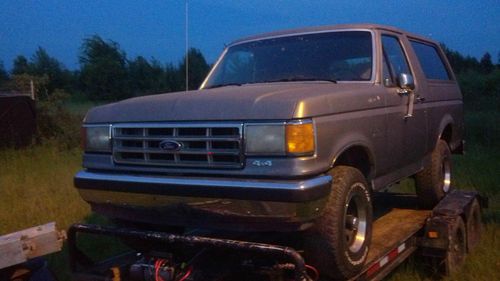 For sale is a full size 1988 bronco project, Motor is a 5.8 - 351 with a rebuilt c6 trans with 0 miles on it also a new starter.  The bronco is in good shape for it's year . the front carpet is vary dirty and seats need to be bolted down. the rear glass will not roll down. have to start it another way other than the key due to a wire being broken somewhere that i have not found just yet.  has duel flowmasters on it with a 8.8 rear end.  front drive shaft is out and 4x4  shifter is not in it but is inside the bronco.  has all 4 tires but would replace them . has back seat in it as well. and does not come with a battery. also the gas pedal cable is broke in the normal place that all are known to break at . all in all this would be a great hunting truck project or parts truck has a great running 351 and a just about new trans starting bid will be at 1000 and from there its what ever goes motor and trans is worth that alone thanks for looking and if you have any questions please feel free to ask me on here or text 24/7 at 803-624-0966 thanks .