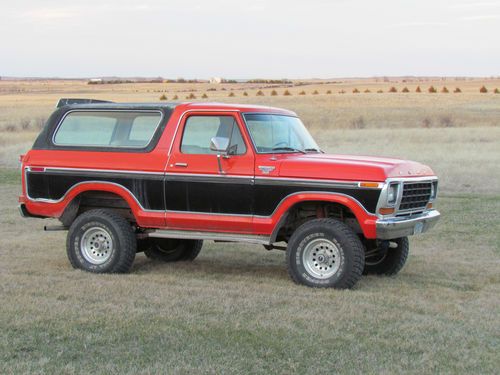 I'm reluctantly selling my 1979 Ford Bronco due to that fact that in the last seven years of ownership I have only driven it less than two thousand miles.  I am the second owner of the bronco purchasing it from the dealership that ordered it brand new for a neighbor of mine.  It has working a/c, new 33x12.5 on 15inch alluminum rims, new master cylinder, brakes, plugs and wires, steering gear box, doors windows anti-rattle rubber seals, new rubber seal on rear window, new exhaust, 4inch left with springs (not blocks) and new shocks, has new reciever hitch (not intstalled), new in box heater core ( existing one is working great), cover, and mint interior.  The bronco has the switch in the dash to roll down the rear window or you can use the key in the rear lock, and both ways work.  The interior is in great shape and the exterior is great except for the passenger side rear panel.  Had someone get out of it without it in park and it rolled into a tree.  It creased the trim and slightly damaged the fender well cosmetically only.  The motor was rebuilt under the one hundred thousand mile mark and it doesn't burn oil or have any leaks.  This is a great bronco that would like to see someone have that will drive it and care for it like I did.  I am asking for 500 down and pickup only.