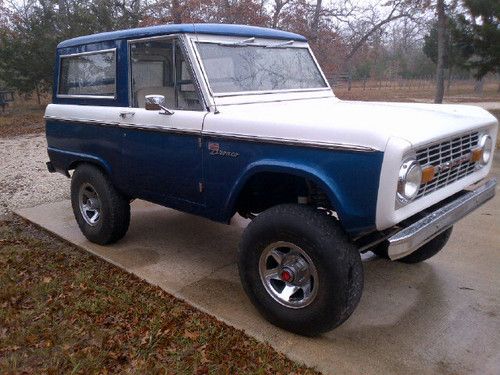 Condition: UsedA vehicle is considered used if it has been registered and issued a title. Used vehicles have had at least one previous owner. The condition of the exterior, interior and engine can vary depending on the vehicle's history. See the seller's listing for full details and description of any imperfections.Seller Notes:"Condition is expected for a 30 plus year old vehicle which has had mechanical & paint work performed. Not like new, but certainly mechanically solid and a cosmetic 7(1-10). Great driver,not a trailer queen for shows."

Bronco is in great mechanical and visual condition(7 of 10).  All functions work as intended. Reciepts for engine, transmission and transfer case rebuild(15K miles on rebuilts components).  Documentation/reciepts from 1995 todate.  Paint is quite good, although not a show finish.  Drives and stops straight.  Prior floor pan rust evident as, floor pans replaced.  All guauges OEM and functional. A real solid driver, not show qaulity .