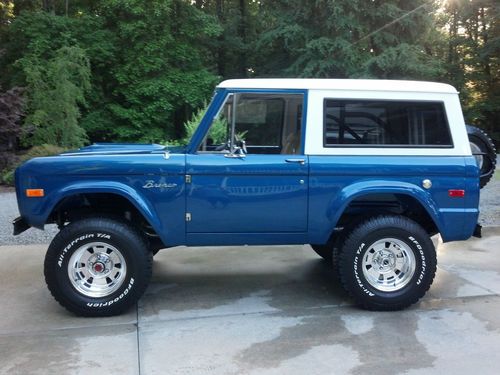 This Bronco was originally owned by a friend of my father. My first trip four wheeling in it was when I was about 10 years old. That was about 34 years ago and I fell in love with the truck. He finally sold it to me in 1998. It was a rough old duck hunting vehicle then. I spent about 5 years and every dime I had restoring it according to my wife. It's been done about 3 years. I have receipts over $40,000.00 from all the usual places you go for Bronco's. It was painted on rotisirre and the underside looks just like the top side. The chassis was completely disassembled and everything was powder coated, axles and all.It's got hydroboost brakes with disc up front. I did new power steering, gear box and all that. It has new oversized fuel tank assembly. Most importanly I keep hearing everyone say Foose is doing a Bronco with steel welded in rear fender opening. I am proud to say I beat him by 4 years. We welded in arches from another pair of stock front fenders so they's match front to rear. The cobra jet style hood scoop is all steel too. It was originally done becasue I thought I would need air cleaner clearance but the hood retains it's original structure underneath. There was heat and sound deadening material done under floor rubber and headliner. The Weld Wheels were "one off" when I ordered them but there may be more in existence now. They weren't custom for me but there was only the prototype in existance when they made these. I love the ole bullet holes but wanted to be original. I don't think a lot of the new Ghetto wheels work on an Early either.  The motor was completely rebuilt. Nothing special, pretty big hydraulic cam and some bolt ons as you can see. Hit me with your questions as I'm sure I've forgotten plenty. And if Alan Jackson is reading this please buy it and remake the "Drive" video. That's my story too.