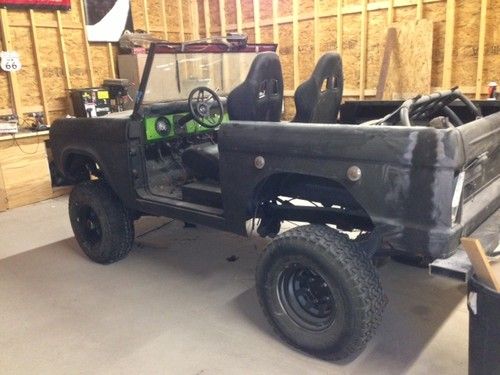 1972 Ford Bronco Wagon. It has an 85 Ford F150 302,Weber intake, electric fuel pump, electric fan, Edelbrock 600 cfm carb. I put two new front fenders on the front.The bronco runs but I haven't drove it on the street. The floor pan have been fiber glassed and would probably need to be replaced at some point in time. The right side quarter was replaced along with the striker plate. I have the doors, top, original seats and steering wheel. They transmission and transfer case seem to be in good condition, I have put a Hurst 3 speed shifter kit on it to relocate it from on the column to the floor. I have bed lined the inside of the bronco to prevent rust. The bronco will need headlight and taillight assembly in order to be street legal. I pulled the doors off in order to put door inserts, I figured it would be cheaper than fixing the doors. The bronco will also need fender flares. I have 31-10.50-15 tires on the front and 32.1150-15 tires on the back. Windshield has a crack along with one of the windows on the top. Like I said this is a rock crawler project and I have listed everything I know of that is wrong or need to complete this project. this is not a show truck and the price reflects this when compared to others on EBay. Thanks for looking