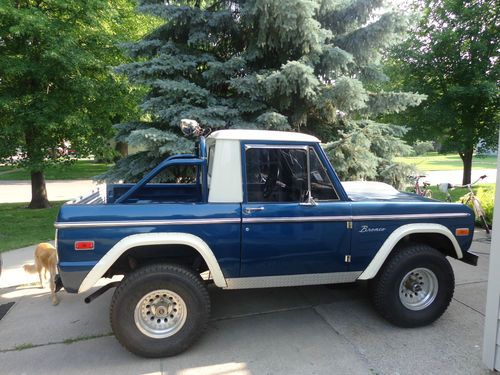 Up for auction is a 1971 Ford Bronco with half cab. It has a 170 cui inline 6 motor with 3 speed column shift manual transmission. This bronco is mainly stock except for the lift kit that was installed by the previous owner and a new wiring harness that I had installed a few years ago. It sits on 33X12.5" tires with Rancho suspension. I hate to sell it but I have not had time to work on it or to enjoy it. It should be with someone who can.

There is very little rust, just some minor rust on windshield and top. There is some minor surface rust on floor and inside of hood but nothing major. I believe the pictures show the condition very well. The wheel wells and floor panels are solid which is quite rare for these trucks. The interior is in pretty rough condition as far as missing carpets and dash being in rough shape. The windshield motor is not installed but I do have it and the cover, but I have no idea if it works or not.

The engine fires right up but could use a rebuild or at least a tune up. It is pretty impressive that it runs as well as it does.  It is 42 years old after all and I do not know if it has ever been rebuilt. The transmission is in similar condition. I believe it needs a new clutch, but it does work. the steering and brakes are manual. No luxuries here. The last time I started it the brakes did not work. I think they may just need to be bled. The steering's gear box is showing some wear so there is some play in the steering. This bronco has dual gas tanks that can be switched over by a valve below the drivers seat. I believe the sending units are out because the fuel gauge does not work.

I am by no way a mechanic so these are just guesses on the condition of the vehicle, but this would make a great project with the condition of the body being so good. The mileage is unknown since the gauge cluster has been replaced a few times. Bronco also comes with some extra trim as well as some other parts. Do not really remember what is all there.

Bronco is located in Milbank, South Dakota. The Buyer is responsible for shipping charges. Payment is to be made via cashiers check, or cash in person. Once payment has been cleared, a clear  title will be provided, along with a bill of sale and the vehicle will be released for pickup or delivery.  A $500 non refundable deposit via Paypal is required upon auction end.

If you have any questions, please contact Eric at (605)-228-7143.  I will be happy to answer any questions and I apologize if I forgot to mention anything. Thank you for looking. I believe the new owner will be very happy with it.