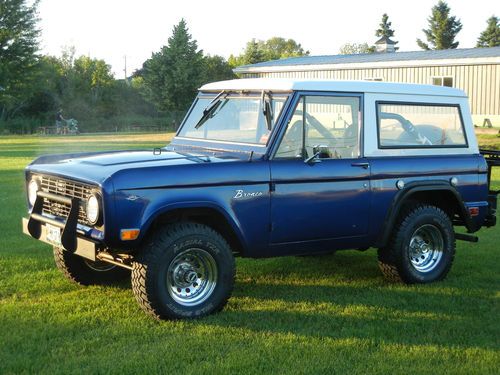 Condition: UsedA vehicle is considered used if it has been registered and issued a title. Used vehicles have had at least one previous owner. The condition of the exterior, interior and engine can vary depending on the vehicle's history. See the seller's listing for full details and description of any imperfections.Seller Notes:"This is one BEAUTIFUL Bronco! There are minor scratches and small areas of surface rust but body and undercarriage are in great condition, no bondo. This was a daily driver and has performed great in all weather conditions."

This is one BEAUTIFUL 4X4 Bronco!  At 45 years it still goes strong and smooth while only having small areas of surface rust and a few scratches.  Body is all metal, no bondo and in great shape.  There are no mechanical problems and has been a smoke free vehicle.  This Bronco has been used as a daily driver and has never let me down in any weather conditions.  Some of the upgrades are :

Bidders: Please bid when you have your finances in order! Deposit Payment is to be sent within 12 hours of auction ending; balance to be sent within 3 days of auction close at the latest. Payment is to be made via FedExed official bank check, personal check, or Bank Wire. No release of vehicle will be made until the funds have been certified and made available. Clear title is in hand, signed over and ready to transfer into your name. Insurance and shipping are responsibility of buyer. Vehicle must be picked up within 21 days of purchase date unless other prior arrangements are made.  Mileage listed is current odometer reading and may or may not be accurate; not sure because of year of vehicle.

If you are thinking of getting a loan to purchase it, please kindly wait until you have the money before bidding, as these auctions aren’t free! If you wish to inspect the unit, you must do so before the auction has ended. Once the auction has ended, inspections will not be permitted! This is not a bidding contest to give you the first opportunity for a walk around after eliminating competing bidders to see if you want to buy it, winning the auction is a commitment to purchase and a legal contract to pay for it. Please understand this when placing your winning bid. If you don’t speak English, you are still required to follow these guidelines! If you have critical questions, please ask them before bidding. This previously owned 1968 Ford Bronco is sold AS IS, where is with no warranty of any kind, including Oral, Written, Verbal, Implied, Fitness, or Otherwise. No future allowance or set aside will be made on account of ANYTHING. This is a very clean 45 year old vehicle but it is 45 years old and is not brand new and is not 100% perfect.