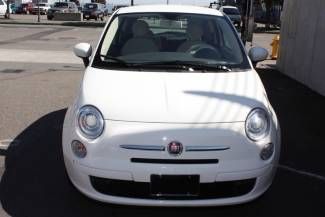 Back in the '60s and '70s, Fiat didn't exactly have an enviable reputation for quality. Of course, lack of quality and a tarnished brand reputation eventually saw the Italian automaker flee the market, only to return with the 500 and the larger 500L in the last few years. However, if J.D. Power's Initial Quality Survey for 2014 is to be believed, modern Fiat products haven't improved quite as much as we might have hoped. Fiat thinks that there is a very simple explanation for its poor performance on the annual list, though.
J.D. Power's IQS looks at flaws among autos in the first 90 days that customers own their new vehicles. In 2014, Fiat wasn't only dead last, it was at the back of the pack by a significant margin. The company's cars tallied 206 problems per 100 vehicles (PP100) compared to a national average of 116 PP100. Even Jeep, the survey's second-to-last finisher, had 146 PP100. Fiat's performance was pitiful.
However, it can all be explained, at least according to US Fiat boss, Jason Stoicevich, who spoke with Ward's Auto. He qualifies the results by stating that the survey came at a particularly bad time for the brand. It produced very few 2014 500 models to allow extra time to introduce the updated 2015 version. That meant that about 91 percent of its vehicles surveyed were examples of the 500L, "which is a new car where there are always quirks to work through," said Stoicevich to Ward's. With only one model providing data, it skewed the results. Of course, that's all well and good, but it suggests that the larger 500L is even more problematic than the overall brand's 206 problems per 100 vehicles.

Apparently to be a cool automaker in Europe, you have to build motorcycles. Volkswagen Group bought Ducati in 2012, and BMW has made bikes longer than it's made cars (until recently, it also owned Husqvarna). Fiat might be the next automaker to get into the two-wheel business, with rumors flying that it is considering buying cash-strapped Italian sportbike brand MV Agusta.
At the moment, it's all still very much a rumor, but the purchase would certainly seem to help the motorcycle company. However, according to Asphalt and Rubber, the business would need a lot of cash to grow and sustain itself. Fiat might not want to invest so much into a brand that may never be a huge moneymaker.
MV Agusta is best known for its racing success in the '50s and '60s. Until Japanese manufacturers took over the sport, the Italian company was one of the fastest things on two wheels, with a long list of championships in various classes. Recently, it was briefly owned by Harley-Davidson.

As Sergio Marchionne flies back and forth between Turin and Auburn Hills, he doesn't just bring Chryslers back with him to Italy to sell as Lancias. He also brings Fiat products to sell Stateside under various Chrysler labels, chief among them Ram.
The former Dodge truck brand launched the Fiat Ducato as the Ram ProMaster earlier this year, giving it a greater foothold in the commercial vehicle market and a replacement for the Sprinter which Mercedes-Benz took back from its Chrysler-partnership days. Now Auburn Hills has announced that Ram will begin selling the Fiat Doblo on this side of the Atlantic as the Ram ProMaster City.
The Doblo, which was twice named International Van of the Year, has sold over 1.3 million units worldwide. Whether that includes the rebadged version which Vauxhall and Opel sell as the Combo is another matter, as is the question over how much longer Fiat and General Motors will continue that particular partnership as the ties between Fiat and Chrysler deepen.