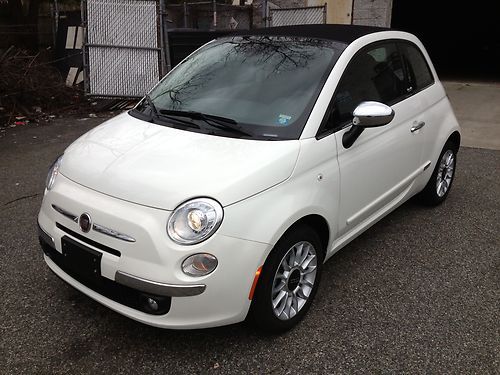 Props must be paid to the people at Abarth, who could've celebrated the 50th anniversary of the 595 - the model that put this performance brand on the map back in the 1960s - with a special edition appearance package and called it a day. But no, that's not how Abarth does things. Instead, it is producing 299 units of this 595 50th Anniversary Edition model that debuted at the Frankfurt Motor Show this week, and it's received much more than a new suit for its big 5-0 celebration.
In addition to the matte white finish and historical livery that reinterprets the original car's look, this progeny of the original 595 also receives a substantial bump in power - an increase of 20 horsepower over the standard 500 Abarth for a new total of 180. The upgraded engine is paired with an "Abarth Competizione" transmission, and the sizzling hatchback rides on 17-inch alloy wheels that hide larger Brembo brakes sized 12 inches in diameter. Not that the standard 500 Abarth sounds wimpy (quite the contrary, actually), but the 595 receives a new "Record Monza" variable back-pressure dual-mode exhaust for an even more stirring soundtrack above 3,000 rpm. The interior, meanwhile, is adorned with red leather seats featuring white inserts and red stitching, and a black leather steering wheel with red inserts, as well as its own assortment of historical logos.
The 595 50th Anniversary Edition will be available to order on September 15th, though we expect the entire lot to go quickly and haven't been told yet if any are earmarked for sale in the US. Our fingers are crossed.

At least once a day we hear about the glory of cars of years past, whether for their light weight, their simplicity, their manual transmissions or the way you could order options without ordering packages. But we know that we - and yes, even we here at Autoblog - romanticize plenty of it; that light weight meant atrocious NVH, those options sheets didn't include any of the things we take for granted in a Ford Fiesta today.
Nevertheless, there are those classics that make it worth it - for them it is no problem to endure the constant draft of bad window seals, the need to add another quart of oil every couple hundred miles. Petrolicious has found one such car and owner, Pierantonio Micciarelli and his Fiat 2300 S Coupe in Milan, Italy. His Ghia-bodied two-door can't be driven during the day and cost him 800 euros in gas for a 2,500-kilometer trip to a wedding, but the payoff is that moving beauty that makes him "feel like an emperor."
But there's no reason to listen to us tell it - enjoy Macciarelli tell his own story in the video below.