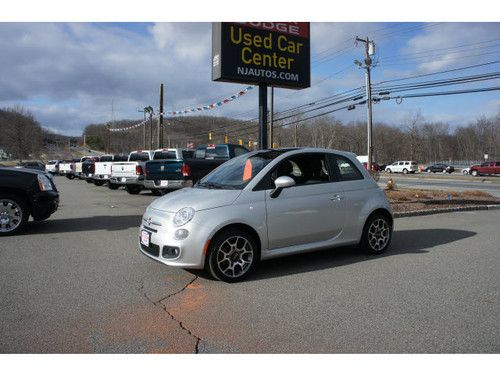 It's been seven years since Fiat relaunched the 500, and it has, by and large, been a runaway success for the Italian automaker. Numerous variations on the theme have followed - from the convertible 500C and performance-oriented Abarth models to the 500L minivan and upcoming 500X crossover - but it's high time that Fiat give the original hatchback a bit of a refresh, and that's just what it's done... to some extent, anyway.
Debuting this week at the Geneva Motor Show, the updated 500 features a number of enhancements to keep it fresh and with (if not quite ahead of) the times. That includes a redesigned instrument cluster centered around a seven-inch TFT display developed by Magnetti Marelli. There's a new 900cc turbo two-pot TwinAir engine being offered with 105 horsepower and 107 pound-feet of torque that can get a Cinquecento so equipped to 62 miles per hour in 10 seconds and on to a 117-mph top speed while delivering 67 miles per gallon (at least on the European cycle). Finally there's a new Cult trim level pictured here, being added to the top of the range that builds on the Lounge trim with more equipment like 16-inch alloys, gloss black roof, chrome or gloss black wing mirrors and more.
We're still waiting to find out what, if any, of this equipment will make the jump to the US model, but for now you can scope out the press release below and the high-res images in the gallery above for a closer look.

News is trickling out of the Serbian factory that's responsible for Fiat 500L production that work has stopped due to a delay in parts delivery. Fiat has been mum on the reasoning for the stoppage, which is going on its tenth day, according to Automotive News. "Production ceased on Wednesday and we still don't know when it will resume," said a spokesperson for Fiat's Serbian operations.
While Fiat isn't saying what the issue is, AN is reporting a number of workers for a local transport company are protesting over unpaid wages. They've blocked the road and rail lines leading towards the factory, preventing the delivery of parts for production.
If the stoppage continues, it's going to be bad news for the 500L, as its numbers have just started to pick up following its launch in June. According to a report earlier this month, sales cracked 1,000 units in September. A lengthy delay in production will also count as another blow for local Fiat dealers, which have struggled over small profits, a limited lineup and rumors that Fiat stores will not be selling the Alfa Romeo 4C as promised.