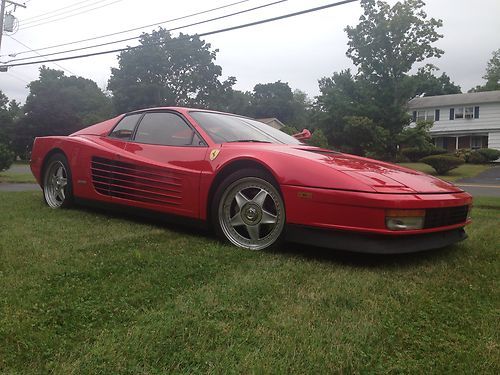 Condition: UsedA vehicle is considered used if it has been registered and issued a title. Used vehicles have had at least one previous owner. The condition of the exterior, interior and engine can vary depending on the vehicle's history. See the seller's listing for full details and description of any imperfections.Seller Notes:"Very nice Paint and clean Car."

While most automakers are clawing and scratching for every possible sale, it sounds like Ferrari is content in losing a few potential customers in the name of better exclusivity and higher profits. Autocar reports that Ferrari chairman Luca di Montezemolo recently stated that the Italian automaker hopes to sell fewer than 7,000 units globally in 2013 compared to last year's tally of 7,318.
As a part of this plan, Ferrari will be slowing its production lines and trying to create a balanced market for its cars in the US, the Middle East, Europe and China - the latter two being the automaker's biggest markets. Montezemolo also said that Ferrari would not be expanding its model lineup with SUVs, sedans or small cars.

Although we're still not really sure what Ferrari plans to call its long-awaited successor to the Enzo, we're certain that this is going to be one mean car. We've heard that it will be called the F150, F150 Italia and even the F70 over the last year and a half. Regardless of its name, this guppy-faced prototype you see above is Ferrari's answer to the McLaren P1 and Porsche 918 Spyder with a rumored 900-horsepower hybrid powertrain.
Since the last time we saw this car testing, the only difference appears to be that the exhaust outlets now may be closer to production form, with dual pipes on each side sitting up higher in the fascia. Aside from that, these shots are much clearer and at a better angle allowing us to get an idea of what the final product might look like. We do see some of this car's details such as the headlight placement and shape similar to the 458 Italia and the massive brakes with drilled carbon ceramic rotors.
No word as to when we might see the production version of the car, but Ferrari did tease a couple photos of it last month and is much further along than spy shots we saw less than a year ago.