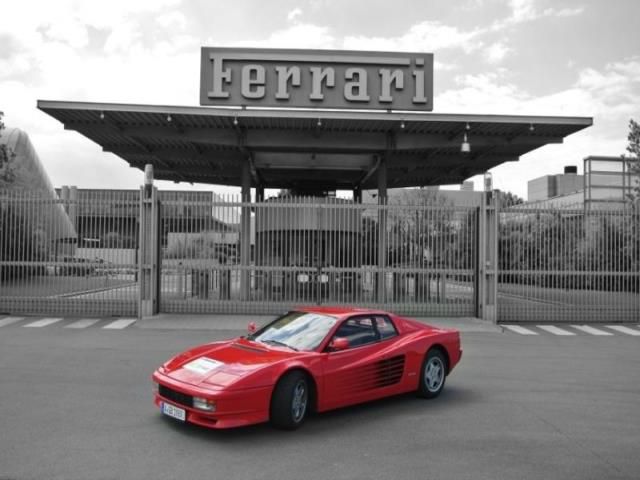 COLLECTORS FERRARI TESTAROSSA ...as i do not want to show the VIN here in ebay, i choose 1980 as date of built - it is 1989! ...First registered 19th of may 1989 to a Ferrari F1 Pilot ...still has his helmet sticker in rear window - his monte carlo parking permit in front window ...winner car of international concours d'elegance 2014 ...official mille miglia press car 2014 ...matching numbers ...full serviced in may 2014 with change of cambelt ...one of 3 Testarossas especially noticed in wikipedia ...bespoken in biography of first owner ...first Testarossa chassis with the stronger side lines ...rare specification with engine code ...A046 ...german TÃœV with all papers done last in may 2014 ...lot of memorabilia regarding to the car and first owner (winning trophy, team jacket, biography signed...) ...discreetly transaction promised (therefor not listing the name of Ferrari pilot) ...no cheap Testarossa, but a good investment and in my opinion a very fair price for the beauty ...would consider a part exchange of an prewar roadster

What next for Stefano Domenicali?

Ferrari is a team that's used to being on top. It does, after all, have more world championships to its name - 15 drivers' titles and 16 constructors' - than any other team in the history of Formula One racing. But despite having some of the best drivers and resources at its disposal, it hasn't won a championship in over five years. Someone had to take the blame for that, and that someone turned out to be Stefano Domenicali.
The team principal who took over after Jean Todt stepped back to focus first on the running of the entire company and then the FIA, Domenicali has presided over the driest spell in the team's history since Michael Schumacher and Ross Brawn arrived in the late 90s to bring Ferrari back to its winning form. Whether that ultimately proves to have been Domenicali's fault or not, the buck stopped on his desk and he resigned a couple of weeks ago, making way for Ferrari's North American chief Marco Mattiacci to take the reins. At least for now, anyway, as rumors circulate of a longer-term solution that could bring Ross Brawn back into the fold following his recent departure from Mercedes.
The big question now, however, is what Domenicali will do next. The latest intel suggests that he could leave four wheels behind but stay in the field of competitive sports to coach an Italian basketball team. The rumors are fueled by reports that Domenicali has been in touch with Giovanni Petrucci, head of the Federazione Italiana Pallacanestro - Italy's national basketball federation. The organization runs two professional basketball leagues within Italy as well as its national team that's won eight international championships, two gold, four silver and four bronze medals in the European league and two silver medals in the Olympics.

Where the current roadgoing Ferrari coupe with its rear-mounted V8 can go beyond this Speciale edition, I don't know. The 458 Italia and Spider already hold a very dear place in the hearts of anyone who has driven them on a sunny day over great roads or tracks, and I was pretty sure nothing could beat the heady sensory combo presented in the 458 Spider when I first drove it back in 2011. I may have to change my opinion now.
Companies like Ferrari are in the enviable position of sprinkling performance dust on their already-great base cars, all just to make them a skosh better and grab us again by the loins for one more model year. Some perspective: in 2002, the legendary Enzo set its personal best around Ferrari's 1.9-mile track at Fiorano, pulling a 1:24.9. This 458 Speciale with four fewer cylinders and more weight beats it with a time of 1:23.5, and not once during my laps did I feel as though I might die if my slightest judgment behind the wheel was less than on the money.

Air Malta recently worked up a little stunt that pitted an Airbus A320 against a Ferrari F12 Berlinetta in a drag race to raise funds for charity. It's easy to forget just how quick something the size of a jetliner can be, but watching the video below shows us just where the big passenger aircraft stands when it comes to sprinting down a runway. We won't spoil the clip for you, you'll just have to check out the showdown below.
Air Malta says it raised over 178,820 euro with the stunt, which is around $230,000. That's despite the fact that intermittent rain showers kept crowds away. Formula One racer Lewis Hamilton even stopped by to say "Hi" to the crowds. He wasn't piloting the F12, however. Check out the video below for yourself.