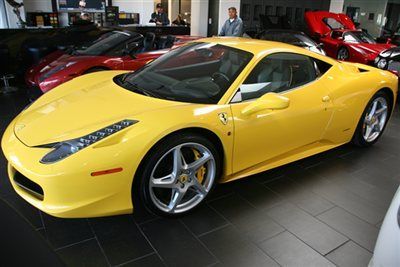 Get a load of these crazy European Nimrods

I've been attending the Geneva Motor Show for the better part of a decade, and it's become my favorite stop on the entire show circuit, in large part because of all the exotic automakers, coachbuilders and green startups. I also love the Palexpo's consistently mind-bending displays of tuners, who typically work exclusively on six-figure automobiles. Some offer subtle improvements and personalization programs, but most seem hellbent on being more outlandish and bizarre than the next, a room full of millionaire class clowns. More often than not, I spy something and think to myself "What kind of Nimrod would do that to a perfectly good ____ ?" This year, that rhetorical question is in fact a self-answering one.
The jokes, they write themselves.
But seriously, if you're wondering who would take a perfectly lovely Ferrari 458 Italia or a Lamborghini Aventador and affix a wild body kit of dubious aerodynamic and aesthetic merit at great extra cost (both to the car's MSRP and to its assuredly grenaded resale value), the answer could very well be Nimrod Elite Tuning, a newer high-end restyling house out of Slovakia. That last locational tidbit might also explain the company's unusual name, which is likely a nod to a mighty Biblical hunter (descendant of Ham and a king of Shinar, Nimrod is mentioned in Genesis and Chronicles) and not meant to be taken as a synonym for "idiot" or "moron."

There are a lot of things you could call the Ferrari FF. Innovative, advanced, pioneering, ponderous... beautiful may not be one of them, though. Because while it does pack Ferrari's first all-wheel drive system, it doesn't pack it into a very pretty shape, alternately described as a chopped shooting brake or stretched hatchback. Word has it, though, that Ferrari is working on a solution.
That solution, according to Car and Driver, would be to chop it down into an FF coupe. Apparently separate from the SP FFX project that ultimately emerged as a one-off, this rebody could potentially solve the FF's stylistic shortcomings and attract more buyers, while retaining the 6.3-liter V12 engine that drives 651 prancing horses to all four wheels. But here's where it gets tricky: if Ferrari simply sloped the roofline and got rid of the rear seats, the finished product would end up precariously close to the F12 Berlinetta, albeit with an extra set of driven wheels.
We'd sooner guess that Maranello would lengthen the form slightly to keep the rear seats, add a trunk and give it a more graceful profile, though the elongated form of the preceding 612 Scaglietti strikes us as what Ferrari was trying to get away from with the FF in the first place. And guessing is as good as we've got at this point, as our attempts to get more from Ferrari PR resulted in a sad (if predictable) "no comment."