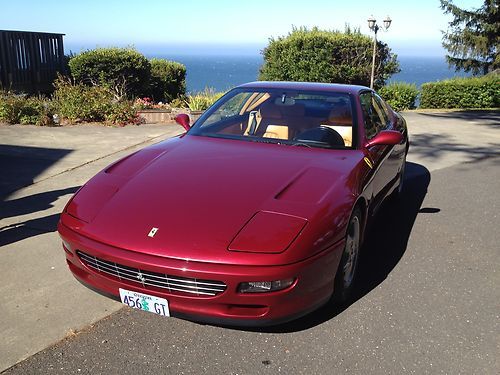 Condition: UsedA vehicle is considered used if it has been registered and issued a title. Used vehicles have had at least one previous owner. The condition of the exterior, interior and engine can vary depending on the vehicle's history. See the seller's listing for full details and description of any imperfections.Seller Notes:"Vehicle service up to date, valve adjust, belts etc. done 700 miles ago. has books, service records, NO TOOLS, car cover included not factory cover, climate control panel has green blotch as shown."

THIS EXCELLENT 1995 FERRARI 456 6 SPEED WAS OWNED AND DRIVEN BY MY LONG TIME FRIEND AND WONDERFUL ARTIST, BOB TAYLOR, WHO RECENTLY PASSED AWAY, I AM LISTING THE VEHICLE FOR HIS WIDOW.

BOB AND I WORKED TOGETHER IN BURLINGAME CA. AT CONCOURSE INCORPORATED IN THE LATE 1970'S AND EARLY 1980'S, TOGETHER WE RESTORED AND SOLD MANY IMPORTANT RACING FERRARI'S INCLUDING 2643 GT THE 250 GTO DEVELOPMENT MULE DRIVEN BY STERLING MOSS AT LEMANS AND SEBRING, AFTER OUR RESTORATION, BOB USED 2643GT AS HIS DAILY DRIVER, BOB KNEW A GOOD FERRARI, BOB TOLD ME THIS 456 GT WAS A GOOD CAR.UNFORTUNATELY IT WAS HIS LAST.
THIS 456GT 6 SPEED FINISHED IN MONZA RED, IS IN EXCELLENT CONDITION,ALL SERVICE COMPLETED APPROXIMATELY 700 MILES AGO, INCLUDING VALVE ADJUST,TIMING BELTS, FLUIDS ETC.
THE WINDOWS HAVE BEEN UPDATED, WORK AND SEAL PERFECTLY, INTERIOR AND EXTERIOR IN EXCELLENT CONDITION, THERE IS A GREEN BLOTCH ON THE CLIMATE CONTROL PANEL AS SHOWN IN PICTURES( A NEW OVERLAY PANEL IS AVAILABLE FROM RICAMBI AMERICA FOR $90.00 64516400R-F [456GT HVAC Panel Replacement - FAHRENHEIT]) OWNERS POUCH, BOOKS AND RECEIPTS INCLUDED,
NO TOOLKIT CAME WITH THE CAR WHEN BOB PURCHASED IT,SO NO TOOLS, THERE IS A NON FACTORY CAR COVER INCLUDED, 1 KEY ONLY WITH CAR.
IT HAS THE FACTORY STEREO WITH 10 DISC FACTORY CD CHANGER. TUBI EXHAUST. READY TO BE DRIVEN BY ITS NEXT OWNER.
ANY QUESTIONS CALL CHRIS HILL/AUTODINO 913-707-1710
CASH SALE ONLY NO TRADES.
$500.00 DOLLAR DEPOSIT BY PAYPAL WITHIN 24 HOURS OF AUCTION CLOSE, FULL PAYMENT BY WIRE TRANSFER, CASH OR VERIFIABLE CASHIERS CHECK FROM USA BANK BEFORE VEHICLE IS RELEASED.
SHIPPING RESPONSIBILITY OF BUYER.

These are the front-runners to take over at Ferrari

Yesterday Ferrari announced a changing of the scarlet-clad guard with the departure of longtime chairman Luca di Montezemolo. Having run the company since shortly after the passing of Enzo Ferrari himself, Montezemolo built the Prancing Horse marque up to the benchmark supercar manufacturer, victorious racing team and household name it is today. In short, Ferrari - and most crucially, its parent company Fiat - will face a most difficult challenge in filling il Advocatto's handmade loafers and putting the company back on the track which Montezemolo laid down over the course of the past two decades.
The question on everyone's mind is, to whom will that challenge fall? To quote Goose from Top Gun, the list is long, but distinguished. Join us as we run down the roster of potential assentors to the leather-clad, carbon-fiber bucket seat at the head of the big table in Maranello.