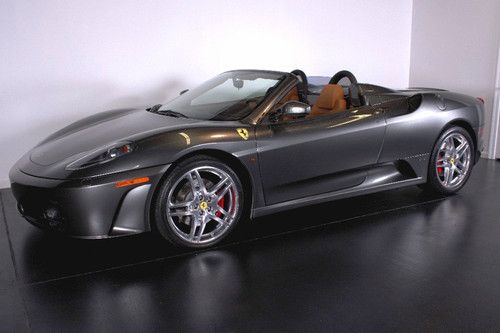 Options and Features Include:

This ’07 F430 Spider is for those with Discriminating taste! It has been strategically ordered in a classy, yet rare color combination that is for the Gentleman Ferrari Enthusiast.

The New York Times' Wheels blog has a really interesting story on a pair of Ferraris that are set to be auctioned off in Monterey during the Pebble Beach Concours d'Elegance. While the two cars are similar on the surface, their differing histories and Ferrari's attitude towards one of them has led to a sort of experimental auction process.
On the one hand, we have one of ten 1967 275 GTB/4 NART Spiders, in the classic Rosso Corsa and appearing at RM Auctions and seen above. On the other, we have a Fly Yellow version that started life as a 1965 275 GTB Coupe, and was converted into a NART Spider. Called a "cut" car, this particular replica is one of about 100 GTB Coupes that were converted into convertibles to satiate the climbing demand for ultra-rare Spiders.
This will mark one of the first times that an original NART Spider will go toe to toe with a replica of itself at auction, and will answer a number of questions about just how important provenance is in the collector car world. Head on over to The Times blog for the full story.

The sexy Ferrari P4/5 Competizione, a cross between the lightweight F430 Scuderia and the race-only F430 GT2 with special Pininfarina bodywork, spent some time in Europe notching a few race victories. But it finally has made its way back to the US and into owner Jim Glickenhaus' collection, where it met its sister car and inspiration, the original P4/5.
During its short-but-sweet two-year racing campaign, it competed in just two races but left a big impact. We'd call any lap of the Nürburgring that's under seven minutes a victory, but, with the help of a hybrid drivetrain, the P4/5C qualified for the 2012 Nürburgring 24 Hours with a lap of 6:51. That's faster than any Ferrari-powered vehicle has ever gone around the 'Ring. The car then went on to win the EXP-1 class (for experimental vehicles), for a World Championship, and finished the race 12th overall in a field of 170 cars. Not bad at all.
For those who haven't kept up on the P4/5C, the hybrid powertrain was introduced to the one-off racecar for 2012 after it had attempted the Nürburgring 24 Hours in 2011 with negligible results. A Ferrari 4.0-liter V8 was joined by a Formula One-style Kinetic Energy Recovery System (KERS), good for a combined 563 horsepower.