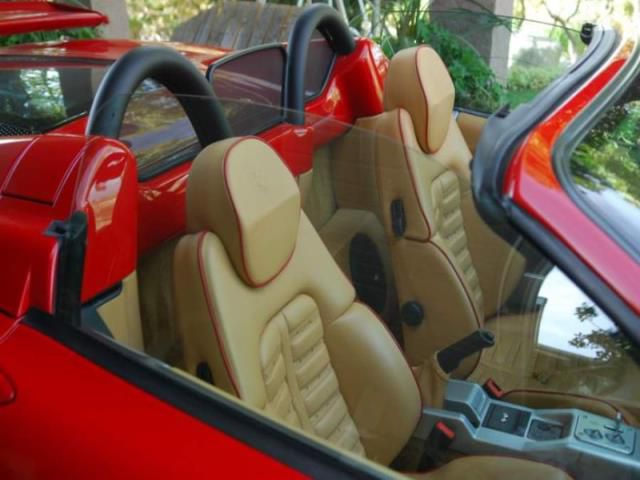 This Ferrari 360 is a real standout with rare racing trim package, (Novitec $20,000) custom stereo ($1500) and custom wheels ($6400). This week I just completed an $18,500 maintenance service at the local Ferrari Dealership, which included a brand new belt service, complete fluid service, new wheel bearings, valve cover gaskets, new brakes, new clutch and new tires. This car is ready to go! All tools and manuals. I am the second owner having purchased the car in 2008 from a Doctor in Dallas at approximately 12,000 miles. There is also an Alpine custom stereo system. Non smoker car, always stored, covered and garaged during colder months.

I'll never forget the day I bought my very first Ferrari. It was a bright-red F40, I'd saved up for it for what felt like an eternity and I couldn't wait to get home so I could park it next to my other four-wheeled piece of pride and joy, a stealth-black Lamborghini Countach, so I could compare their blunt-edge, wedge-like shapes and massive spoilers in microscopic detail.
The year was 1987, and the event felt like the pinnacle of my life's achievement. Though both of my Italians had been die-cast in 1/18th scale, I coveted the two supercars with the verve of a true collector, taking in the intricacies of their engine bays, opening their doors and turning their working steering wheels. In reality, the two could have hardly been more different, and yet they both looked like finely crafted perfection to my seven-year-old eyes, their questionable day-to-day practicality completely overshadowed by their unquestionably exotic shapes.
More than two decades later, I'm belting myself into the driver's seat of the 2015 Ferrari California T, the first turbocharged Ferrari since the F40 went out of production in 1992. The Tuscan countryside spreads out ahead, a twisting barrage of two-lane roads on the agenda, and I can't help but reminisce of my much younger self as I twist the red key and thumb the equally red ignition button on the steering wheel.

When Ferrari makes an open-top version of one of its V12 super-GTs, it typically comes in particularly low production numbers. Maranello only made 448 examples of the 550 Barchetta Pininfarina, 559 of the 575 Superamerica and 599 units of the 599 SA Aperta. What we have here, however, is not just the first F12 roadster we've seen yet, but also the most exclusive.
Called the F12 TRS, it's obviously based on the F12 Berlinetta, but with some key modifications. Not the least of which is the open-top body-style (which may or may not have a folding roof mechanism of some kind), coupled with some unique bodywork like a cowled rear deck and reshaped hood. But the TRS (which we can only assume is some tribute to the 250 Testa Rossa) is also said to pack an F1-derived KERS hybrid assist, presumably similar to the one in the LaFerrari - or more poignantly, in the 599 HY-KERS concept - to give the 6.3-liter V12 even more juice than the prodigious 730 horsepower it produces in stock Berlinetta form.
The vehicle, apparently spotted in the garage at the company's Fiorano test track, appears to be a one-off built by Ferrari's Special Projects division for one discerning and evidently very wealthy customer who is said to have paid $4.2 million for the privilege.

The FF is quite a departure for Ferrari - it's the company's first hatchback and all-wheel-drive vehicle - so it isn't surprising that it rubs some people the wrong way, even if the car itself is very good. Well, judging from these patent drawings of what looks like a FF coupe filed with the Office for Harmonization in the Internal Market (OHIM), Ferrari has plans to build one.
We're not sure if Ferrari is planning a production run, however, and it's very possible this is a one-off special being built for a very rich customer, a la Eric Clapton and his 458 Italia. Patent drawings of Clapton's special 458 were filed with OHIM before it was finished, as well.
We think the regular FF is a good-looking car as is, but would welcome a coupe version if it looked like the one in these drawings. It could be a great alternative to the F12 Berlinetta for people who want all-wheel drive and a lower profile.