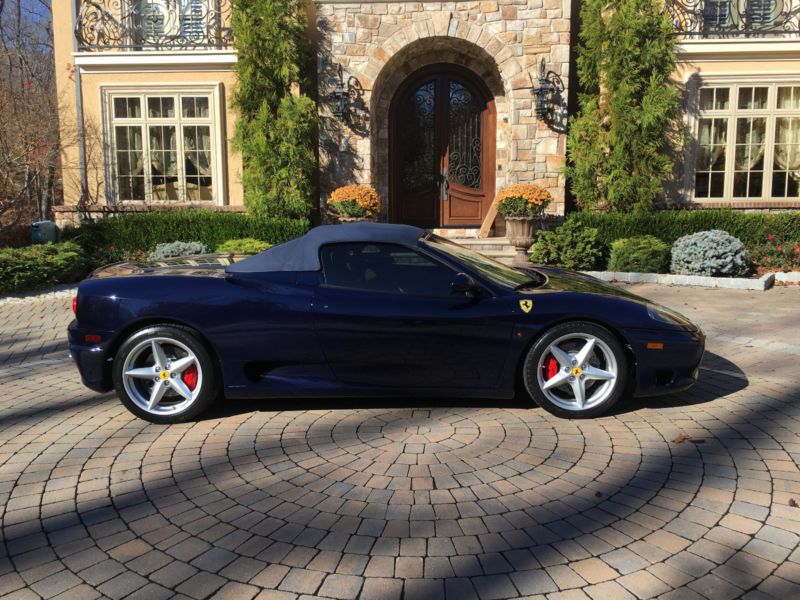 Feel free to ask me any questions about the car : corinnecttustison@uknuts.com .

Beautiful 2002 Ferrari 360 Spider
ONLY 2 Owners
Rare 6 Speed Gated Manuel Transmission
Rare Pozzi Blue with Tan Interior
Rare Factory Option The Original Ferrari Luggage.
Luggage has remained unused in the Factory Yellow Covers.
Rear Challenge Grille
Front Challenge Grilles
Ferrari Scuderia Shields
Ferrari Original Car Cover
Factory 6 Disc Changer
Very Well Cared For in Very Good Condition.
The Ferrari 360 6 Speeds are one of the most reliable cars on the Ferrari Line Up.
The Value on the Ferrari 6 Speed cars continue to appreciate. As the years go by less and less of the Gated Manuel
cars will be available and many more will desire the chance to own and enjoy the amazing experience of shifting the
True Ferrari Gated Transmission and with the Convertible Top Down you get to feel that Ferrari V8 roar behind you.