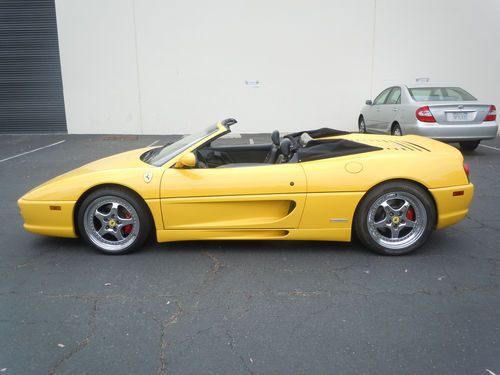 Condition: UsedA vehicle is considered used if it has been registered and issued a title. Used vehicles have had at least one previous owner. The condition of the exterior, interior and engine can vary depending on the vehicle's history. See the seller's listing for full details and description of any imperfections.Seller Notes:"This vehicle is in Excellent condition. No accidents, Clean Car Fax. 9000 original miles.slight scuff marks on drivers seat bolster, Gear shift indicator LED is partially no functioning.30k service done in 8/10. Driven only 500 miles since then. Cars started and driven Weekly"

Ferrari chairman ticked off by Alonso

Luca Cordero di Montezemolo does not strike us as the kind of person we'd want to cross. We imagine the Chairman of Ferrari as sort of like an automotive Don Corleone, a thought that is further confirmed when we hear about the aftermath of last weekend's Hungarian Grand Prix.
Fernando Alonso made some unsubstantiated remarks that have angered his team, with The Daily Mail reporting that when asked after the race what he wanted for his birthday, the Spaniard responded "Someone else's car." And while no one seems to know exactly what was said, it was enough to prompt a personal phone call from the boss of Ferrari on Alonso's birthday for a dressing down.
Montezemolo reminded Alonso that, "All the great champions who have driven for Ferrari have always been asked to put the interests of the team above their own. This is the moment to stay calm, avoid polemics and show humility and determination in making one's own contribution, standing alongside the team and its people both at the track and outside it."

Ferrari California replica from Ferris Bueller is so choice

We like car auctions well enough, but often the high-end affairs are a bit too much like outdoor museums - very beautiful and very cold, and you're not allowed to touch anything. A perfect case in point is the upcoming Mecum auction during the 2013 Pebble Beach weekend, which will feature the legendary replica Ferrari 250 GT California Spyder used in none other than Ferris Bueller's Day Off. Only three were made. The current owner spent ten years restoring this car. It is his love, it is his passion. (Well, it was before he decided to auction it, anyway.)
Actually built by Modena Design and Development in El Cajon, CA, the official name of the stunning replica is Modena Spyder California. Built up on a tube frame, with a meticulously maintained interior and powered by a 500-horsepower small block V8 the car is so choice. If you have the means, we highly recommend picking one up.
Mecum hasn't suggested a predicted auction price for the Hollywood relic as of yet, but with the perfect pedigree to pull Gen X heartstrings, and the proliferation of stupid-wealthy fourtysomethings in and around northern California, we wouldn't be surprised to see a decent value. Just don't wait on it, life moves pretty fast around Pebble Beach. If you'd like to read a full description of the car with fewer script-quotes, look, it's real simple, scroll down.