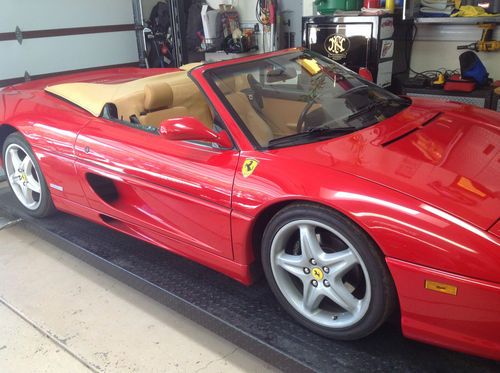 Condition: UsedA vehicle is considered used if it has been registered and issued a title. Used vehicles have had at least one previous owner. The condition of the exterior, interior and engine can vary depending on the vehicle's history. See the seller's listing for full details and description of any imperfections.Seller Notes:"Top plastic window cracked, top has bad micro switch goes up and down no problem but must use the override"

I'm selling my F355 spider this is a beautiful fun drivers car. This car has full Tubi Exhaust sounds great the car has and complete service since I have owned it. The engine was pulled at 31000 new belts. New clutch and countless other parts and upgrades I have documented $30,000.00 plus that I have put into this car. I have the car listed as a salvage title but the car has been repaired and now has a non salvage New Mexico title. There are a few minor scratches the rims could use a repaint but are straight and have new tires. Comes with tonneau cover, Ferrari car cover. New kenwood stereo with amp and Boston door speakers.

Thankfully, the weekend's Formula One dramas all concerned events that happened off the track, with both Caterham and Marussia going into administration, after which a rumored boycott by the small teams was avoided. That gave the 18 drivers left on the grid freedom to focus on making the most of the Texas sunshine for Sunday's US Grand Prix.
Having finished two Free Practices behind teammate Mercedes AMG Petronas teammate Lewis Hamilton, the second one just .003 behind, Nico Rosberg said he had speed in hand and proved it during qualifying, beating Hamilton to the top spot by four-tenths of a second. Williams drivers Valtteri Bottas and Felipe Massa came behind, followed by Daniel Ricciardo in the Infiniti Red Bull Racing, Fernando Alonso in the Ferrari, the McLaren duo of Jenson Button and Kevin Magnussen, Kimi Räikkönen in the second Ferrari, and little-team Sauber bursting out of the storm clouds into tenth, Adrian Sutil making the team's first-time Q3 appearance all year.
When it came time to race, the carbon-fiber fisticuffs began on the first lap.

The World's Fastest Four-Passenger is Frickin' Fabulous
"I miss my mommy."
Those frightened words floated from the mouth of a five-year-old boy strapped snugly into a booster seat in the backseat of the Ferrari FF I was piloting. Moments earlier, his father had allowed me to take him, and his two brothers, for their first ride in a supercar, and I had apparently failed miserably.