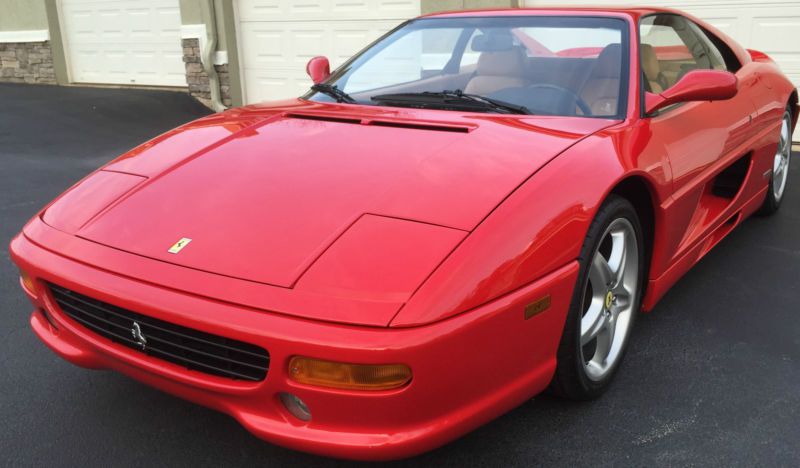 For more details email me at: adrienneneren@netzero.net .

Asking price is negotiable!
This is the classic Berlinetta coupe that F355 buyers are consistently searching for in the most sought after red
and tan. Maintenance is not due for another 4 years (last major service performed Sep-2015 @ 17,500 miles) & you
could drive for the cost of annual fluids only. The car has just been fully detailed, is completely original &
ready to drive. There have been no accidents, body or paint work and the interior dash leather was just recovered.
Stickies have been addressed, the a/c blows ice cold and it has just been fitted with new tires. This F355 includes
the complete toolkit, owners binder with manuals and records.
Major service completed in Sep-2015 (including water pump, Hill Tensioners)
Full detail with paint correction completed in Sep-2015
PPI completed in Sep-2015 by Foreign Cars Italia (Ferrari dealer in Greensboro, NC) with all issues addressed
Dash, Instrument cover, side pods and airbag brand new (just recovered)
No sticky issues
Wheels have no curb rash, etc.
Clean title (in hand) and Carfax (available upon request) with no issues or stories
Includes: new tires (less than 6 months old), all manuals, complete tool kit, factory stereo and changer

Stefano Domenicali, the team principal of Ferrari's struggling Formula One team, has resigned. Domenicali's term at the helm of the legendary F1 team started with a bang, as the Scuderia captured the constructors' title in 2008, but went downhill rather quickly.
In his tenure, Domenicali, above, has witnessed Red Bull assert its dominance of F1 while the red cars from Italy have languished, failing to even challenge for a championship during the past four seasons. Ferrari's best season under Domenicali was 2012, and it still finished 60 points behind Red Bull.
Domenicali issued a statement saying he took "responsibility, as I have always done, for our current situation."