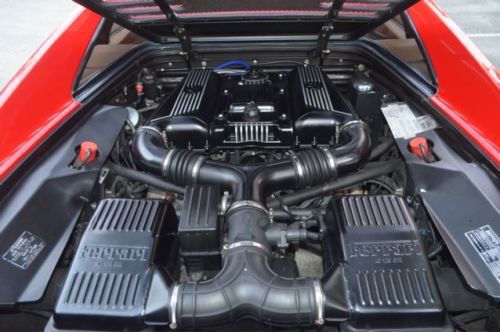 There isn't much in the world that can aurally match the screeching wail of a Formula 1 car at redline. We obviously can't say whether or not the showmanship of starting this 1998 Ferrari F300 in front of the assembled masses at Barrett-Jackson and slowly taking it up to its 18,000-rpm redline had any effect on bidders, but it did, at the very least, result in a round of applause.
This '98 Ferrari F300 was driven 38 times by Michael Schumacher, and there was another round of applause for the driver, who's currently in a medically induced coma and listed in stable condition after a skiing accident. This particular example is number three of nine total built for the '98 season. Power comes from a 3.0-liter V10 engine producing 805 horsepower at 17,500 rpm.
After it was all said and done, bidding ended at $1.7 million (plus another 10 percent in fees). Check out our live images from the auction floor above, and scroll down below for a spine-tinglingly loud auction video and to read its official description.

Alonso and Rossi to field Ferrari at Le Mans?

The plot thickens and just keeps thickening when it comes to Ferrari's potential return to Le Mans. Antonello Coletta, the head of Ferrari's sports car racing program, first suggested that the new regulations being implemented by the ACO could potentially see the Prancing Horse marque compete in the top-tier LMP1 class. His thoughts have since been echoed by Stefano Domenicali, the head of the Scuderia's F1 team, and by chairman Luca di Montezemolo. And now we're hearing rumors over its potential driver lineup.
Word has it that Ferrari could send Valentino Rossi and Fernando Alonso to pilot its prototype at Le Mans in 2015 or 2016. The rumors were tweeted by Mark Webber (embedded below), who recently left F1 to drive for Porsche at Le Mans - and could amount to pure speculation, to some inside track on hard news or (as is often the case) something in between. One way or another, both Rossi and Alonso are multiple world champions in their fields with strong ties to Maranello and would make a formidable lineup - particularly if paired, we'd venture, with Ferrari's test driver Marc Gené, who won at Le Mans with Peugeot in 2009.
Although the Rossi connection would seem the greater stretch, it might actually make the most sense of the two. With nothing left to prove on two wheels, the seven-time MotoGP champion has been talking about leaving the series. He's test-driven Ferrari F1 cars on several occasions and raced the Ferrari 458 Italia GT3 in the Blancpain Endurance Series last season. The move would be a rare departure for Alonso, however, who has raced almost exclusively in open-wheel single seaters his entire career, and would need to balance the program with his F1 commitments. That is, assuming he doesn't get fed up with chasing after Sebastian Vettel and teaming with Kimi Raikkonen by then.