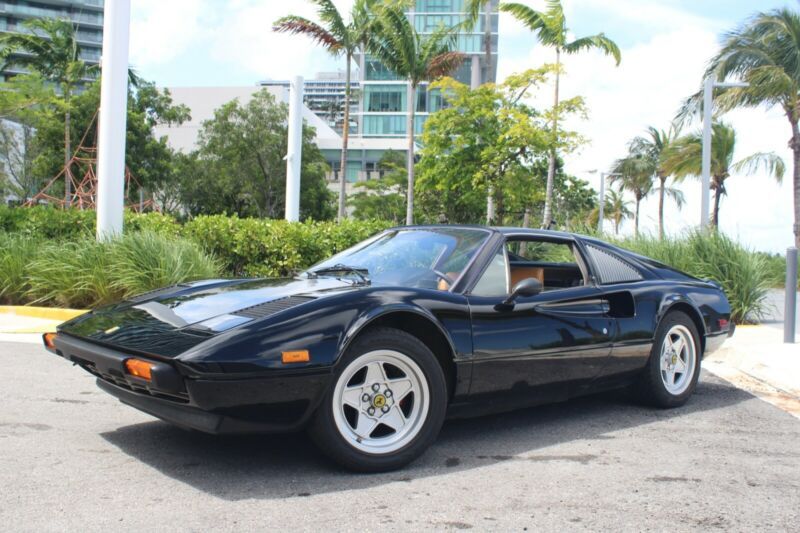 This 1980 Ferrari 308 GTSi is powered by a 2.9L quad-cam V8 paired with a five-speed manual transaxle and is
finished in black over tan leather. Modifications include 16″ Superformance wheels, a Birdman fuse box, Nardi
steering wheel, a modified exhaust system, and a Norwood Autocraft power window relay. A timing belt service was
completed in January 2017, and work during the past year included a mechanical inspection and replacement of the
spark plugs and cold-start valve, new optima battery, new AC compresor, new AC belt, full interior restoration and
detailing including seats, and center console, new e-brake boot, new oil and filter oil, and a complete paint
correction and detailing.


The Pininfarina-designed bodywork is finished in black and features a removable roof panel and pop-up headlights.
The previous seller states that the door skins and hinge assemblies were replaced upon purchase in 1986, and the
car was repainted at that time.


Superformance 16″ wheels with Ferrari center caps are wrapped in Goodyear Eagle GT tires. The the steering rack
bushing and boots were replaced in January 2017 by Norwood Auto Italia of Carrollton, Texas, and stainless steel
braided brake lines were also added. The removed factory Cromadora wheels are included in the sale.


The interior is fitted with tan leather upholstery on the seating surfaces and matching door panels, as well as a
contrasting black dashboard and carpets. A full detail and restoration was performed last month by Fibrenew
Hollywood. Equipment includes R134a-converted Borletti air conditioning, and a gated shifter with a dogleg first
gear position.


The three-spoke leather-wrapped Nardi steering wheel frames Veglia instrumentation including a 10k-rpm tachometer
and an 180-mph speedometer, as well as gauges for oil pressure, fuel level, and coolant temperature.

If it wasn't obscene enough to go off-roading in a Rolls-Royce Phantom or rally driving a Ferrari Enzo, the Tax The Rich crew has gotten its hands on a pair of ultra-rare Ferrari F50 models to perform a tug-of-war battle, which we usually see reserved for pickup trucks. Only 349 F50s were ever built, but this video pits two of them against each other by attaching a rope to the front ends, throwing the shifter into reverse and punching the throttle.
As we've come to expect from this video troupe, the action starts off with plenty of gravel-chucking, dirt-road drifting before the two cars finally meet head-to-head. Scroll down to watch the 520-hp V12s screaming in reverse as the tires smoke away.