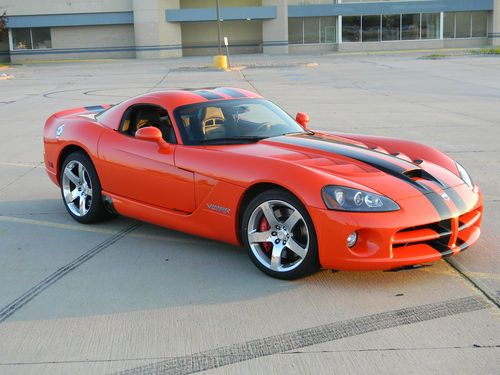 2008 Dodge Srt Viper  Bought new from Woodhouse Dodge in Blair Nebraska,one owner adult driven car.Car is in very good shape never been tracked or abused.It was built in may 2008 so it has solid axles on both sides like the acr's.The color is very viper orange which was a 750 dollar option it also has painted on black stripes which was a 3000 dollar option,car listed for almost 93000 new. The car runs and drives as good as the day i bought it. Never been involved in any accidents has been serviced regularly.Have owned 3 great corvettes but i never got the attention i get driving this thing, someone is always taking pictures of it with their cell phones as i'm driving down the road it's a real head turner. Car also has a remote controlled front license plate that flips down out of sight or can quickly flip back up as needed. Car has 8.4L V10 with 600 Horsepower. Also has factory Alpine am/fm-cd player with seaperate amp under passenger seat.  Feel free to contact me at 402 350-1257 or email at mmcgo3@hotmail.com Thanks Mark.