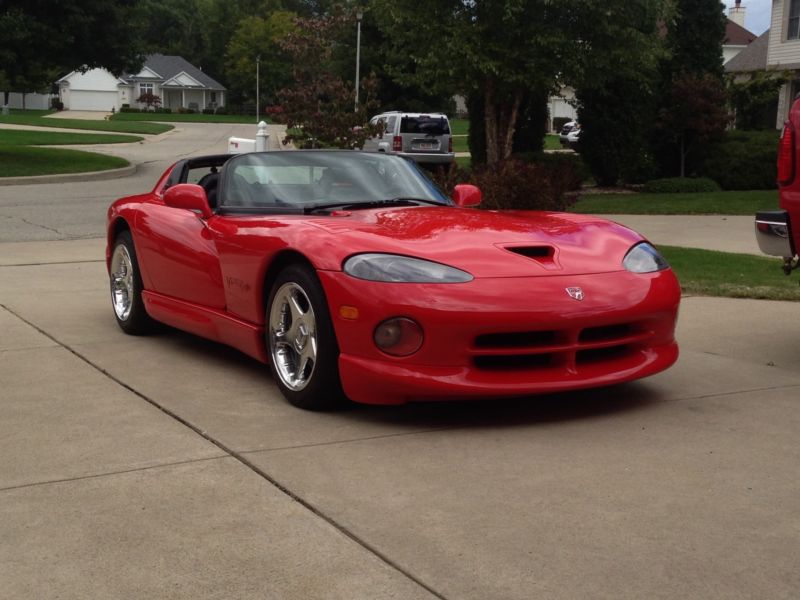 More infos regarding my car at: efraineccastlen@ukso.com .

FOR SALE IS MY CHERRY 1998 DODGE VIPER RT10. HERE IS THE RUN DOWN...
1998
RT10 ROADSTER
ONLY 16,900 MILES
BRAND NEW TIRES ($2300)
FACTORY HARD TOP
NEVER ABUSED
AWESOME SHAPE
LEATHER SEATS AND INTERIOR IS CLEAN ENOUGH TO EAT OFF OF
STEREO AMP IN THE TRUNK
MAIN POWER SWITCH INSTALLED IN TRUNK TO PREVENT THEFT
BATTERY TENDER
OEM DODGE SERVICE MANUAL INCLUDED
CLEAR TITLE
NO ACCIDENTS
NO REPAINTED PANELS
COSMETICALLY ONE OF THE NICEST VIPERS IVE EVER SEEN
RECENT OIL CHANGE ALONG WITH NEW SPARK PLUGS
ALWAYS HEATED GARAGE KEPT
THIS IS A VERY NICE VIPER. IVE TAKEN VERY GOOD CARE OF HER. COMPARED WITH ALOT OF OTHER VIPERS, THIS ONE IS
A 9 ON THE "10 SCALE". YOU WONT BE DISAPPOINTED.
I NEVER USE THE HARD TOP THEREFORE I NEVER RUN THE AIR CONDITIONER. IT MAY NEED TO BE RECHARGED.