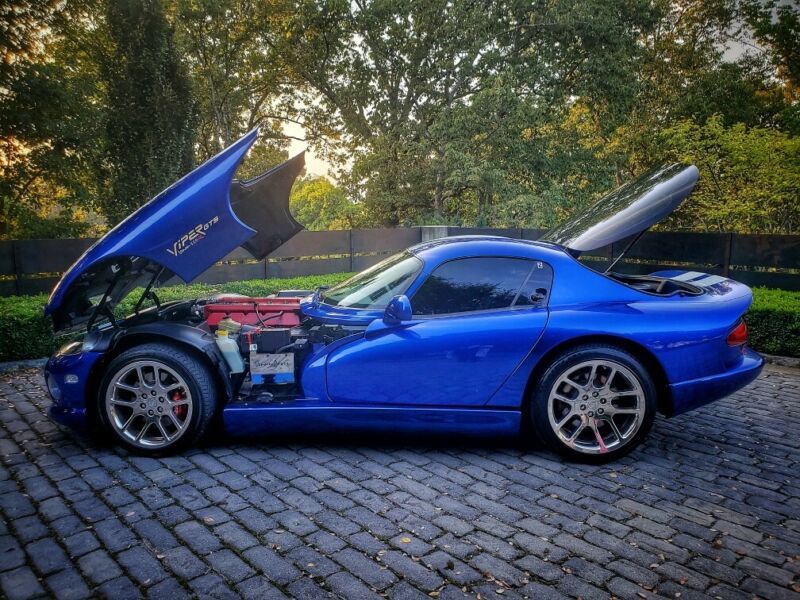 This is not your ordinary Dodge Viper. This is a Venom Hennessey 550R #31. It’s a 6 speed manual transmission
with custom airplane style billet shift handle. Boasting the 10 cylinder 8 liter engine with all the modifications
of the best in the business Hennessey. This year/mode/color combo is the most sought after out there, as it’s
the first year with all the power options moving from the RT10 over to the coupe GTS.


In addition to the Hennessey upgrades, R&J distributing did the following:
*96-98 GTs models had no hatch release on the car. They installed the 02 hatch release setup.
*Many 96-98 driver seats had wear marks from normal use. He replaced the drivers seat.
*Most older vipers and you can see them now on eBay, have side sill heat bubbles in the paint. They removed both
sills, refinished, and no heat bubbles.
*Most 96-98 models have a small leak around the oil pan, and all 93-98 Vipers have the 8qt oil pan, they upgraded
to the 10qt oil pan with matching baffle and trays and updated the oil pan gasket with the updated aluminum one.
*Many 96-97 GTS models has issues with the timing cover gasket leaking. This has been fixed.
*As you can see from images, there is a really cool custom stereo system installed in the trunk. They spent 4K on
the materials and hardware alone. It is glass with viper logos and a blue light to match the theme. Sounds great
and looks amazing. Infinity and JBL products.
*They upgraded to the 19” chrome wheels 6k upgrade.