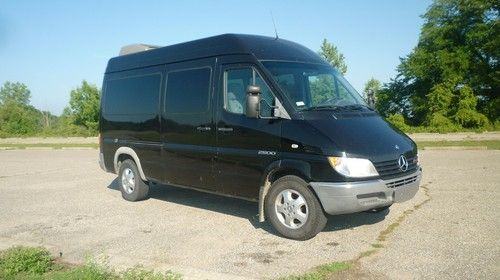 2004 Dodge Mercedes Sprinter 10 Passenger van. 2nd owner (purchased from original owner January, 2011). Black exterior with grey patterned interior. Trusted Mercedes diesel engine. About 20 MPG. Tow package with trailer brake. Front and rear heat with auxiliary heater / timer. Front and rear A/C. High top gives immense amount of space. Fun and easy to drive and turns on a dime. Keyless entry with 3 key fabs. Power locks and windows. Radio with cassette and 4 speakers. All of the emblems show Mercedes including actual Mercedes wheels (tacky stock Sprinter wheels were replaced). Interior in good shape (seats are all excellent). All seats have head rests and individual seat belts attached to seat (not ceiling). On a scale of 1-10 (10 being perfect) exterior would be a 5-6 with some rust spots, random scratches and a dent on the side (see picture). Decent tires. Decent brakes (recently done at the dealer). 150 amp alternator replaced by dealer. Oil changes always done by dealer since we have owned it. Runs and drives excellent with no hidden engine issues.