One Extremely Nice One Ton Truck...don't Miss This One...not Many Like This One! on 2040-cars 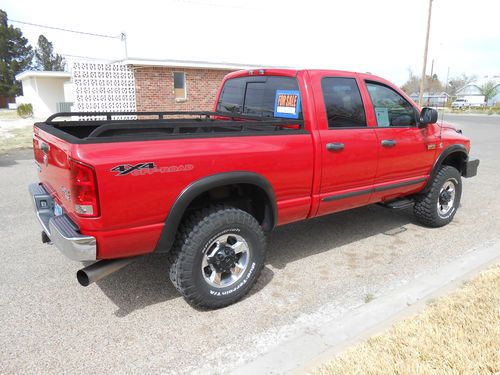 This is one very beautiful truck, I am the second owner, this first owner babied it and so have I. This is actually a 2004.5 it is the famous "600", what I love about this year model is that Dodge made the right changes with intercooler, exhaust and other things but it was before all the diesel particulate junk came along that just chokes them down, this is a very much sought after year model truck.  This truck is not even broke in at just a tad under 62,000 miles, for the Cummins diesel its like it just left the new car lot. The only things that I have  done to this truck is: A 5" turbo back stainless steel magnaflow exhaust system with an aeroturbine muffler, sounds great. In the engine is the Banks Ram intake manifold, and Injen Technology air intake system, and two Optima red top batteries.This truck has never had any kind of chip, or computer work done to it, my thought is why mess with something that works so well. My plan was simply to help it breathe a little better, with this system you can sure hear that turbo working, music to my ears! The exterior of this truck truly shines like a new one other than just a few minor rock chips down along the bottom the body is in excellent condition, absolutely no rust at all. The interior is just as exquisite, no tears, fading, worn areas, nothing at all wrong with
anything. Head liner looks perfectly new, non-smoking, everything works. This is really a great truck, this is a must see to believe. Factory wheels with BFG mud terrain 35x12.5x17. Bed is perfect no dents, I put a painted in bed liner still in good shape. The only thing that might be considered an issue is the grill guard bumper combo. It is made by Ranch Hand and then I made some changes to it, then painted it and now after about 2.5 years the clear coat is coming off, easy fix though. other than that there isn't anything else. Any questions from serious buyers can contact me @ 432-290-0442 or email me at roballmit@gmail.com. Any more info you need just ask. But let me say again, these kind of trucks in this great a shape and low mileage do not come along to often.