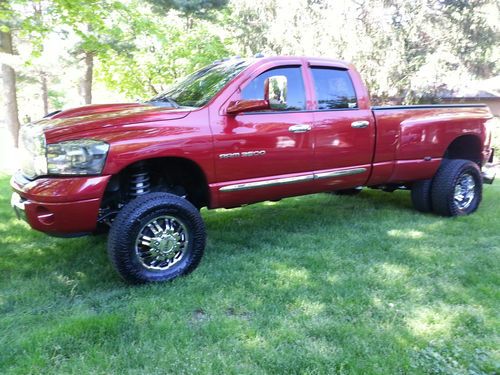 Up for sale is my 2006 Dodge Ram 3500 4x4 Laramie. The truck has leather heated seats,power seats, 6 cd player with GPS, flip down dvd player. The truck is layed out inside with nice husky color matched floor mats. I had the tow mirrors,bumper which is custom,vent shades all painted to be colormatched with the truck. I put a 4.5 inch Tuff country Easy Ride lift on with coil springs and upper and lower control arms. I have 285/75/17 dune grapplers with wheel spacers in the rear on it that only have a few thousand miles on them along with brand new moto metal rims. It has a aftermarket hood scoop plus fold out steps that fold out when you open any door, mud flaps with chrome weights, along with chrome door handles on all doors plus tailgate. It has truxedo tonneau cover on it along with spray in bedliner with a flip up gooseneck ball,windows are tinted 20 percent all the way around along with a double banner accross the windshield. It has LED smoked tail lights and fender lights, smoked headlights, third brake light and tailgate light along with led light strip under the tailgate . It has aftermarket horizontal billet grille. It has matching Tuff country traction bars on the rear axle to reduce axle wrap. Now the engine built from bottom up it has a 12V crank which is 1.5 times stronger than the CR's 12V rods which both were polished balanced. It has a performance fluidampner. The block was bored and honed .020 over. The block and head were both decked to be true, i used billet bolt on freeze plugs for the rear and side of the block. i also made up a high pressure bypass on cylinder #6. For pistons i had .020 over malhe pistons machined with a .010 valve relief in them along with the skirts teflon coated and the tops of the pistons coated and rated for 2200 degrees. I used ARP main studs for the crank and ARP rod bolts along with the stock girdle which was machined for the main studs. I put a 210-210 performance cam in it pushing hamilton performance pushrods. I had the head ported and polished and new valve guides and seats along with hamilton #110 springs. I used #625 Arp head studs to bolt to block. It has a 3 piece 2nd gen manifold with a 66mm silver bullet from industrial injection. The truck came with an exhaust brake from factory as a add on from cummins so it uses a vacuum pump that runs off the serpentine belt. It has plished 3 inch intercooler tubes along with intake horn. Custom intake due to the 2nd gen manifold. For fuel i have a Fass 150 supplying Duel fuelers from PPE it uses the stock CP3 along with a CP3 for a LLY. It has 150Hp injectors with stainless steel bodies for higher pressure, along with 6.7l cross over tubes to flow more fuel to the injectors. The rail is capped with a boost fooler on it. Its tuned with a Smarty po6 with TNTR tunes. I have a snow performance water meth injection which uses the windshield washer container as the tank and sprays into the intake horn. It has its own moniter for boost and egts so you can adjust it to spray however you want. It has glowshift gauges with egt,boost,rail pressure. It has the G56 6 speed wich has a Southa Bend 3600 clutch in it. The truck runs and drives great and its very clean inside and out minor scratches on a small dent on the hood. The truck is from texas it has never seen salt the frame is super clean, no rust anywhere! The only thing wrong with the truck is the screen for the radio doesnt always light up. Im probably missing something if you have any questions or want more pics call me at 440-669-0548 Thanks